Temptation and Surrender by Stephanie Laurens

Everyone watch out! Lungs are about to seize!! That's right, there's a new Stephanie Laurens book out on the shelves.

I'm actually a big fan of Ms. Laurens. I've read every single installment of her Cynster and Bastion club series. But what I am NOT a fan of is some authors' tendencies to over use their 'standard' phrases. Meaning, early in their career they "invent" a clever description or phrase. Then proceed to use that phrase over and over in every subsequent novel. "Her lungs seized" happens to be Ms. Laurens's favored phrase and it annoys me enough to throw me straight out of the narrative and my comfy suspension of disbelief.

As for the book itself, it is definitely not her best work. I'd probably say mediocre. I liked the characters, REALLY liked the inclusion of Phyllida and Lucifer (some of my favorites from her world). What I didn't like was the complete lack of suspense in the treasure hunt (I had it figured out much too soon), the lack of real menace with BOTH kidnappings of the twins, and the way the ending seemed slapped together. The setting, also, was extremely sketchy. There was far, far more detail in All About Love, Lucifer's story. I also, predictably, skimmed/skipped the sex scenes because they are far too explicit and repetitive for me.

It's nice to read Jonas's story--who has a far more direct Cynster connection that some of the previous 'Cynster' novels. But I honestly think Ms. Laurens has been writing about the family far too long. Time to challenge herself in both substance and phrases. Please, I'm begging you, no more seizing lungs.
Posted by Amber at 3:12 PM No comments:

Mary Balogh kicks off her newest family series with a book that seems eerily familiar. I'm not quite sure why, but First Comes Marriage seems to echo both themes and characters from Slightly Dangerous, the finale to her Bedwyn series.

Now, First Comes Marriage is not a bad book. It is a bit formal and exact, tending to show the attention to detail that comes from Balogh's background as a Signet Regency author. If I hadn't read the OTHER book about an effervescent female lead character and a stuck up nobleman, I might have enjoyed it a bit more.

The good news is that the secondary characters in this series are MORE interesting than the leads--which means that the subsequent installments (issued monthly) should provide a bit more entertainment. One has to wonder if Balogh is unaware of how much she copied herself. Or if she's running out of stories to tell.
Posted by Amber at 1:50 PM No comments:

I normally prefer my vampire romances on the lighter side. Give me a Katie MacAlister or Lynsay Sands and I'm happy. Of course, it could be I prefer those two authors because they have quite distinct narrative voices. Those vampire romances don't sound the same as the other hundred or so published every year.

After reading glowing praise for the Black Dagger Brotherhood by J.R. Ward, I decided to take a chance on a 'serious' vampire romance. I was immediately struck by how very unique--edgy-- the writing was. While Ward's stories are a far cry from the almost giddy stories by Sands, they are just as distinct in their style. The urban feel, language, grittiness made me feel like this was truly a cross between a police procedural, a fantasy novel, and a vampire romance.

It's a rare book that lingers with me longer than a day or two. I read so many. This one left me not only thinking about it, recommending it, but also seeking out the next few in the series.
Posted by Amber at 1:05 PM No comments:

Taylor was the most recent winner of the American Title contest (IV), and if this book is any indication, she's picked the right career. The Magic Knot is truly a work of art. Although I have read other "fairy" books, this is the first one that didn't become overly explicit, overly dark, or so sunk in the creation of the world that the characters become lost.

As with most of my favorite romances, the characters are front and center of this story. Taylor squeezes a lot of information into her narrative, but never once did I feel that the background was more important than the story or the characters. And while I did like the two main characters, it was the supporting cast that caught my attention. I find myself hoping against hope that their stories are coming next.

I do have to agree with Nicole, from the RT blog, that the cover of this book does not come close to doing it justice. It looks like a standard Regency, when it is in reality one of the most compelling contemporary fantasy romances I've read in years. You can read her mini-rant about bad covers here.

For those looking for a fresh take on English/Irish lore, you should try the Magic Knot.
Posted by Amber at 10:56 AM No comments:

Love with the Perfect Scoundrel by Sophia Nash

This is the first book I've read by Sophia Nash. At first glance, it is typical Avon historical fare--right down to the extremely BORING cover. But after a page or two, it becomes pretty obvious that Nash's characters are anything but ordinary.

Her hero, a former colonist blacksmith, is certainly not your typical bored noble or haughty aristocrat. And I loved the combination of gruffness, practicality and gentleness he exuded. The heroine was also not your average, easily discomposed young lady, but a realistic, pragmatic woman.

What I didn't love, at all, was the jerkiness of the narrative. It plodded along at a steady pace, then --whoosh--jumped through scenes that could have been more fully explored. The bad guys in the story popped out of nowhere, had a scene or two, then popped back out. The ending was extremely odd--almost an afterthought.

I finished the book, feeling as if two terrific characters were treated unfairly in a sub-par book. Turns out the cover was a fairly good indicator of the mediocrity of this particular novel.
Posted by Amber at 5:38 PM No comments:

Charlotte Hughes, probably best known as co-author of the Full Series with Janet Evanovich, has released the second in her Kate Holly series. Those who haven't read the first installment, What Looks Like Crazy, may be a little lost.

While this is a funny, light-hearted book in the style of Janet E., this is not really a romance. It's not really a mystery either. I'm not really sure what it is. Caper may be accurate. I do know that it is a part of the increasing trend of multi-book series that break the molds of traditional genres. Stephanie Bond's Body Movers series is another example of this technique/marketing ploy.

Nutcase is a quick read with fun, quirky characters but didn't quite live up to the first installment in the series.
Posted by Amber at 3:21 PM No comments:

Email ThisBlogThis!Share to TwitterShare to FacebookShare to Pinterest
Tags: mystery 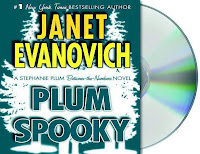 Perhaps it's because she decided to make fun of her pseudo-paranormal plot lines. Perhaps it's because there is very little Morelli/Ranger angst. It could be, also, that Evanovich has toned down her personal schedule--focusing on rereleasing older romance titles rather than cranking out more than one or two books a year.
Although I wish I'd seen a tiny bit more of Grandma Mazur (my favorite Plum universe character), I turned off the audiobook with a smile on my face and a renewed enthusiasm for the newest full-length installment due out this summer.
Posted by Amber at 6:25 PM No comments:

Email ThisBlogThis!Share to TwitterShare to FacebookShare to Pinterest
Tags: mystery

Danger in a Red Dress by Christina Dodd

I'm not sure what happened, but Christina Dodd's newest left me wanting to pitch the book out a convenient window. Or at least take a scalding hot shower.

I normally love her books. They are usually suspenseful and have interesting characters. I usually end with a smile on my face. Danger in a Red Dress left me feeling like I wanted to vomit.

The ick factor was a major deterrent to enjoyment. I just could not get past the fact that the male lead character was a paid voyeur--err security expert. Watching the female lead (Hannah) through video surveillance, listening to her phone calls, watching her "take care of things" in her bed. It completely and totally grossed me out. It was, in fact, too eerily similar to the movie Sliver with Sharon Stone.

Added to that is the fact that I truly did not like the personalities of either character. At all. The ONLY character in the entire book that I liked was Gabriel's second in command--Daniel. And the too convenient inclusion of the Prescott families at the end just rang hollow with me. It felt more like a cutesy marketing ploy rather than a well-planned conclusion to two series.

Perhaps there really is a woman who would forgive being spied on, lied to about a man's identity TWICE, accused of murder etc., but she is not someone I could ever relate to.
Posted by Amber at 8:26 AM No comments: