Friday was kind of a chill day at RT, at least for me. Unlike Thursday, which had so much that appealed on the agenda, there wasn't all that much I wanted to see Friday.

I went to the Shooting Stars Gala where I sat at the lovely Delores Fossen's table. It was basically glorified Bingo (I swear there were 3 reader panels that were bingo related), but it was nice to sit and chat in a more relaxed atmosphere with authors. 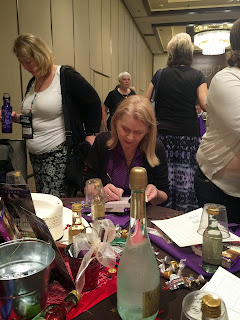 Review: Kissing Under the Mistletoe by Marina Adair

I am still clawing my way out of the Reading Slump That Will Not Die, so I took to Twitter to find some new-to-me authors who are similar to those whose books nearly always work for me (specifically Jill Shalvis and Maisey Yates).  Twitter, as always, came through. One of the authors suggested was Marina Adair.

I'm not sure how I ended up choosing this particular book, since it's a Christmas book, but it definitely fit the bill for what I was looking for: lighter, FUNNY romance. The set up is pretty simple: single mom Regan lands in Napa Valley with a new job prospect and a huge dollop of hope that things in her life will get easier. Soon she learns that her past has caught up with her and that her own personal nemesis is sabotaging her hopes and dreams again.

Thursday started out wondering where our morning events went. RT used to hold breakfast events, but this year, there was only one. After braving the epic coffee line, I "crashed" a bookseller/librarian panel with Jill Shalvis and Eloisa James (it was open to everyone, but I was the only blogger/reader there). 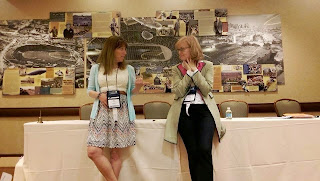 The panel was on curating the perfect romance collection and featured some brainstorming about how to get the word out about events, how to gather a good, representational selection of romance, and how to play around with displays to cross sell with other genres.

I'm officially back from Dallas and the RT Booklover's Convention. As always, it's a truly magical experience to immerse yourself in a sea of other book people—most of whom read the types of books you do. Especially when you read romance and can't find people in your day to day life to talk books with. 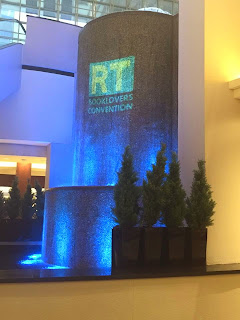 This is my 4th RT, and I made a deliberate attempt to go to the more informational panels rather than the social ones. Don't get me wrong, the parties are usually fun, but I love the almost reporter like hat I get to wear as I live tweet the panels where new ideas, writing advice, and publishing updates are shared. 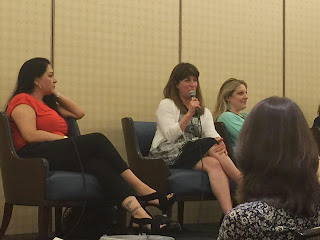 Sylvia Day shared that the death of the mass market and the rise of the audio book were two turns in publishing that surprised her--although she doesn't usually pay too much attention to what's trendy. I'd have to agree (while also lamenting the fact because I LOATHE trade paperbacks.)

As for keeping sex scenes fresh, the entire panel agreed that if you're struggling to write a sex scene, that if it's feeling stale, it's because it doesn't belong there. Sex should move the plot or relationship forward. The story should not make sense without it. I think that's something most readers agree with, also.

Posted by Amber at 9:58 AM 2 comments: Links to this post

This month's theme is Kickin' it Old School (at least 10 years old). I have plenty of those in the TBR, but I particularly love the old print Regencies that they don't make anymore. I haven't had a lot of luck finding many new entries of these tame gems in the ebook world. I miss them.

This one falls into the spinster/poor relation category. Corey (WTH is up with *that* name?) decides to help her very pregnant cousin with her children as Corey tries to figure out what to do about her future. Her parents are spending their money bailing her older brother out of trouble, so she feels like she must soon seek employment to better support them. A plot device that had me giving the side eye to this book early on.

It's Corey's bad luck that her cousin's confinement is coinciding with a traditional fishing tournament hosted by her cousin's husband. (Way to support your wife, jackass). The men in attendance are well known pranksters, and Corey is less than thrilled to have her visit interrupted by them.

The main problem with this book is that everyone except the heroine is a gigantic ass. They are self absorbed, deceitful, manipulative, childish... Even the hero. And there's a big pile of fishing filler. Like, everything you never wanted to know about fly fishing in the 19th century in teeny, tiny detail. Right down to which bugs are hatching. ZZZ.

I never really cared about the romance or any of the characters. It was a big pile of meh. This isn't the worst book out there, but there are definitely better ones.


IS IT A PASSING WHIM...
Cordelia Bransford, a spinster at twenty-four, is happy to spend a few months at Lodesham Hall helping her expectant cousin care for her three little children. Among the guests attending the Earl's annual fishing tourney is Lord Matthew Allerton, a man with a reputation for more than his share of youthful scandal. Cory vows to resist his good looks and easy charm, believing his flirtatious manner is nothing more than habit. No dashing rakehell could possibly be tamed by a vicar's unsophisticated daughter...

...OR A ROMANCE TO LAST A LIFETIME?
Matt has spent the last few months recovering from his Waterloo injuries, and is much in need of pleasant diversion. He delights in teaching Corey and the children the fine art of angling, despite her witty dismissal of his flirtatious advances. She is refreshingly unlike the frivolous young ladies he's known--and now that he actually wants a woman to take him seriously, Matt is dismayed by Corey's absolute refusal to do so! But her love is a prize indeed--and her hand is well worth winning...

Despite my lack of blogging, I'm still going to the RT Booklovers Convention. It's my annual sanity break from the boys. I love them dearly, but let's face it: they're boys.

This year, the convention is being held in Dallas which I'm kind of meh about. I've been there, done that. Next year is Vegas and ditto. So I don't have to worry about any sightseeing while I'm there. I might even get to eat between sessions. (Hahahahahaha).

If you're coming, please try to find me! I usually forget to introduce myself by my blog/twitter handle. I'll be AMBER...before I remember to say my blog name a few minutes later.

The best part of these conventions is that they are made for shy, introverts, too. And if you live in BFE like I do, they give you a rare chance to truly chat face to face with other readers who like what you read. It's a powerful thing.
Posted by Amber at 6:33 AM 2 comments: Links to this post