Hump Day is back and with it comes the midweek blues. That means it's time for classic movie day!

And in keeping with my belief that books and movies should be escapism and not depressing, here's another silly movie to watch--if you haven't seen it yet.

Posted by Amber at 8:45 AM No comments: Links to this post

I've been steadily working my way through Shiloh Walker's backlist having started with her newest Hunters novel, Hunter's Need (which I thoroughly enjoyed). So, needless to say, I'm reading these out of order. And so far, that doesn't seem to be much of a problem other than some minor who hooks up with whom spoilage.

Vax, a witch and semi-retired Hunter, is forced back into action by "the call" that all Hunters have. He's still haunted by the death of his wife, Cora, ninety-six years ago and is content to wish for death and stew in his loneliness. So he resents being thrust into the search for whatever supernatural SNAFU is happening.

Jess Warren is a reporter trying to avenge the death of her sister--a death she believes she caused by getting too close to something while investigating. And while she, too, wishes death will claim her, she wants to get justice for her sister first. And although she has some low key psychic abilities, she's unaware that the people responsible for her sister's death are "other."

I'm not sure what's happened to Lynsay Sands's writing lately, but it's not as good as it used to be. Maybe it's from spending too much time in her Argeneau paranormal series, but her last two historical romances just haven't measured up. The last one, Devil of the Highlands, lacked her trademark humor. Taming the Highland Bride

lacks any hope of originality.

Merry Stewart has spent most of her adult life running her family's holdings and dealing with her drunken father and brothers. She's dreamed of escaping via marriage, but her betrothed has been off fighting the Crusades. And despite returning from the battlefield, he has yet to send for her. So when her family tells her she's been sent for, she's far from reluctant to leave. Until she discovers her betrothed completely inebriated--and it seems she's leaving one drunk-filled home for another.

There's more! »
Posted by Amber at 8:50 AM No comments: Links to this post 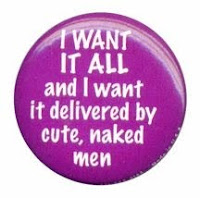 I am feeling quite a bit like Bartleby, the Scrivener right now. I can think of tons of things I should be doing. But to each and every suggestion, my inner voice replies "I would prefer not to." Although, admittedly, I lack Barleby's emotionless tone and careless attitude. And am very much alive. I think. Yep, there's a pulse.

Wednesdays are kind of the bastard stepchildren in the book world. Monday is when we hear all of the good gossip. Tuesdays are the new release days where lots of shiny new covers tempt us. Wednesdays? Nothing.

So, in honor of the most boring day of the week, and my general grouchy mood, I'm designating Wednesday as watch a classic movie day.

Today's movie is To Catch a Thief starring Cary Grant and Grace Kelly. It's a romance. And a mystery. And a caper movie. And did I mention it's directed by Alfred Hitchcock? And filmed in France? Mood lifter indeed! No, this isn't a deep movie. It's completely predictable. But it is one that I enjoy watching just to follow the chemistry between Grant and Kelly.


Posted by Amber at 10:34 AM No comments: Links to this post

This is a very sweet story. It may be a little too sweet for some. I had problems with it mainly because the heroine is so very, very young. And that youth is obvious throughout most of the novel. Isabella really doesn't have any true depth until at least midway through Promise Me Tonight

I could have done without the prologue. I understood what the author was going for, but it just seemed like overkill. Like using a cast iron frying pan to swat a fly. I much prefer to have that kind of information woven into the narrative. Yes, the childhood loss of both parents and a baby sister plays a large role in why the hero does not wish to marry, but there are subtler ways to do it.

One other pet peeve that this book struck was a vagueness of setting. I want to be able to fully visualize each and every location equally. And I really didn't get that here. There were some great opportunities to use the setting as an integral part of the story, but they were missed. The folly, the neighboring houses, Scotland, the ship all felt superficial.

Despite the few shortcomings, this story was surprisingly effective emotionally. Izzie's correspondence that heads each chapter was delightful. I have a soft spot for boy next door stories; there really aren't that many of them in the historical romance genre. And James's pain and indecision were palpable. As was Izzy's naive infatuation. Best of all, Lindsey has a distinctive writing style. Something that many authors take years to achieve. It's an effervescent style of writing that more often than not will have you smiling at turns of phrase as you're reading.

Overall, it's a fantastic first novel. And, hooray, part of a series!

My Grade: B-
Posted by Amber at 8:43 AM No comments: Links to this post

Review: How I Met My Countess by Elizabeth Boyle

There's just something about Regency spy novels that appeals to me. Give me some Regency (or Victorian, I'm not picky) smuttiness mixed with the intrigue, danger, and adventure that spy stories just naturally have, and I'm a happy girl.

How I Met My Countess

is almost two books in one. The bulk of the book is told in a flashback style. I promise, it's not nearly as annoying as it sounds. The flashback tells the entire story of the our hero and heroine's unconventional romance. The remainder is about reconciliation and a minor subplot or two about inheritances, secrets, and a gaggle of widows.

I enjoyed this book far more than recent offerings by this author, probably because it reminds me so much of the fun spy novels she has written--books like Stealing the Bride--where adventure and humor blend together with the romance.

For even more historical spy cravings, here is some suggested reading:

Posted by Amber at 12:39 PM No comments: Links to this post

at the store. And yes, I did get some strange looks from the other store patrons. Pretty sure they were because of the dancing.

The over-arching theme here is, of course, Valentine's Day. But that is pretty much where the similarities end. Sands's novella, Vampire Valentine,  is an Argeneau story and features Tiny McGraw--a secondary character from several full length vampire novels. Pamela Palmer's story, Hearts Untamed, is about shifters--sort of. And Jaime Rush's story, Kiss and Kill Cupid,  is about psychic powers and a serial killer.

There's more! »
Posted by Amber at 3:09 PM No comments: Links to this post

More from the vault: originally published on Myspace July 16, 2007

by Sandra Hill. It has to be one of the most unique stories I've ever read. Where else are you going to read about Ex-Amish Ex-Navy SEALs?

I thought Hill was extremely knowledgeable about Amish and Mennonite beliefs and handled much of the issues with care. I was not so impressed by her handling of the Native American issues(or American Indian, depending on your PC preference), though.

The book is still fun and funny, as her books always are. You will enjoy it more if you've read others in her Cajun series as characters from the series make reappearances here.
I'm not going to even try to describe the plot, because it sounds silly in print. It IS silly, but it is also a great read...perfect for the beach or any other time you need something that won't drag you down.

Posted by Amber at 8:54 AM No comments: Links to this post

Review: Succubi Like It Hot by Jill Myles Succubus Diaries, #2

Jill Myles's Succubus Diaries series is definitely different. I really didn't like the main character all that much, but the author's writing is so darn funny that I found myself reading it at light speed to find out what happened next.

I love it (LOVE  IT) when authors have clear narrative voices. And I love stories written with humor.

I'm kind of a traditionalist when it comes to the romance label, though, so I'm not really certain Succubi Like It Hot

qualifies for me. There's an ongoing struggle between our main character, Jackie, and her two main love interests... And given that she's a succubus, there isn't really an emotional connection attached to the sex. It's an itch to be scratched and that's all. Which I'm also not so okay with.

There's more! »
Posted by Amber at 8:14 AM No comments: Links to this post

As always, plot spoilers are contained within....you've been warned.

There's just something about modern Western romances that I love. Maybe because cowboys have a certain romantic mystique without having to deal with the hardships that faced those living in the 19th century American west. Or because most cowboys are hardworking, crazy or both. And it helps to have an author like Linda Lael Miller writing about them, because she knows her stuff. Unfortunately, McKettricks of Texas: Tate

didn't live up to expectations.

There's no question that Miller nails the cowboy/rancher parts of this story, but I was a little surprised by the conflict in this book. I haven't read a LLM book that dealt with infidelity before. Maybe I missed one in her backlist, but that was new to me with this author. Sure, the characters in question weren't married at the time but there was every expectation of being so.

There's more! »
Posted by Amber at 8:22 AM No comments: Links to this post

Review: At the Duke's Pleasure by Tracy Anne Warren

It's been awhile since I've read the whole 'betrothed since birth' story. It's a common story in medieval romances, but seems to have lost some popularity in Regency or Victorian romances. At least in the ones I've been reading recently.

I try not to read other reviews of books before I write my own because I'm afraid they'll color my opinion. But in this case, I broke my cardinal rule. I have to say that I'm apparently in the minority here. I *loved* this book. I completely understood the motivations of the heroine (Claire)--which were sore points for many reviewers. Yes, she goes on spending sprees. Yes, she acts inappropriately. Yes, she ends up endangering herself.  She's acting out in increasingly dangerous ways as the novel progresses. But what motivates her isn't so much resistance against the betrothal or the choice of groom. I suspect it would be easier for her if she were indifferent to Edward. But having watched her mother slowly die inside from having her love rejected, Claire is determined that she can't follow through with the betrothal and is doing anything she can to get him to jilt her.

There's more! »
Posted by Amber at 3:36 PM No comments: Links to this post