The Untamed Bride by Stephanie Laurens 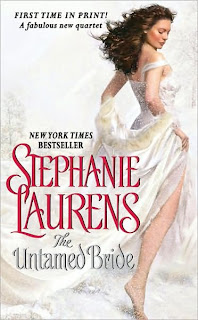 I am dumbfounded that I am having to write a less than stellar review of the Untamed Bride. Not because I didn't like the story. But because I didn't like the writing! Stephanie Laurens's writing is usually so palpably different from other authors. It is convoluted, yet flows easily. Not so this book. The sentences are too complex. Semi-colons, commas, and dashes extend her sentences to paragraph length. And the intensity she normally conveys through her writing is missing. Her normal writing cadence is off somehow. I've read my fair share of 19th century literature, but these sentences honestly rivaled Thoreau's Civil Disobedience for their length and complexity. Not something appropriate for a modern romance novel at any rate. She corrects this tendency about 1/3 of the way through, but the damage is done.

The characterization also fails to really develop as quickly as it usually does. There is a superficiality to the characters that is very unusual for this author. I don't know if it's due to the need to set up the entire series with a long prologue or if it's merely the inherent difficulties of switching series, but there was a real distance between the reader and the characters that surprised and disappointed me. Del's character eventually evolves into a more realistic character, as does Deliah's, but having to compete with so many other established characters makes them seem less vibrant than they should have.


(And why on Earth did Laurens give her heroine a name that--even the character acknowledges--is often confused with the more common name of Delilah? Give her a name that doesn't trip the reader up every time she sees it, please?!)

One pet peeve I have with this particular novel is the inequity with which she treats the servants. The Indian servants are almost invisible. No real descriptions or dialogue. This contrasts sharply with the English servants including the maid, Bess, Del's batman, Cobby and Gasthorpe, the Bastion Club's majordomo.

My other pet peeve is Ms. Laurens's use of her stock phrase. It's in just about every book--often more than a few times. I only found it once this time. I believe she makes it to page 177 before any "lungs seized." So in this respect, I think she's getting better at not relying on her few choice phrases that work, but only for those who haven't read the author's entire backlist.

And now a few gripes about the physical book itself. And I would like to take a minute to point out that Ms. Laurens has no responsibility and very little input into how her book is made, printed, designed etc. So none of the following can in any way be determined "her fault."

I can honestly say that whoever put together this book wasn't thinking clearly. The print is extremely small. Far, far smaller than any other book I've read that Avon has published. It is VERY difficult to read. And I have no vision problems at all. Added to that, the print itself is fuzzy. It looks like it was printed in draft mode--where the paper is visible behind the ink and the characters are not crisp and clear. Maybe I got a bad copy, but the typesetting alone sets me off. If you want to include the 'world of Stephanie Laurens' booklet at the end, fine. But don't shrink the rest of the book to fit the same number of pages to do it. Avon would have been better served to issue that booklet in its own binding.

And add the cover to the list of publisher stupidity. Seriously. The presence of snow plays a large part in the novel, but looking at the cover, all I can think is "get that girl some shoes." It's not sexy to show someone in a thin gown, barefoot, with snow swirling around her. (That was MY take on the cover at any rate).

I enjoyed the story.  I liked the characters, too. I just wish they were a bit more fully realized. But the problems with the actual writing combined with a lackluster characterization means that this was a disappointment for me.