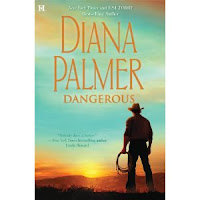 worthy of a hardcover release. It's clear that Diana Palmer has zero familiarity with gaming. Equally clear that she's not all that familiar with law enforcement. In fact, based on her writing, I'm wondering if she's familiar with 21st century life at all.

Our hero, Kilraven, is a fed working undercover. He's still haunted by the murder of his wife and three year old daughter 7 years before. And while he's aware that Winnie, our young heroine, has a crush on him, he's content to ignore her in the hopes that her feelings will fade with time.

Winnie has watched and loved Kilraven from afar for a long time. She keeps a frail hope alive that he will one day return her feelings. Her work as a 9-1-1 dispatcher keeps her in at least peripheral contact with him--even resulting her saving his life once due to her somewhat supernatural intuition.


Kilraven is at times callous, contemptuous of her feelings, and an ass. I really didn't care that he was still suffering. One minute, he avoids Winnie. The next he shoves his tongue down her throat. Followed by a stupid plan to use a "temporary" marriage as a cover for questioning a suspect.

“What a sweetheart you are,”he ground out as his mouth suddenly ground down into hers.

Far worse than the "telling" way Palmer writes are the glaring inconsistencies in characters and plot. First, she shows our hero drinking a wine cooler--something most guys wouldn't be caught dead drinking--then a hundred pages later he claims he doesn't drink? Then we have the super naive, innocent TSTL 9-1-1 dispatcher who later references bondage? Um...yeah.

I found the notion of "waiting until marriage" contrived and incredibly unbelievable here. As if a fake marriage was necessary to absolve these two people of having sexual feelings for each other. As if those feelings were unnatural or shameful.  And as if divorce after sex was somehow more appealing than sex outside of marriage.

And as for the writing...I don't know where Palmer lives (or in what universe, really) but where I've lived, one doesn't "activate" a television. Unless you have a Wonder Twin power. You don't "activate" a cell phone either, unless you're turning on service for the first time. It's called turning it on. Powering it on. Clicking the remote.  Not activating.

Equally annoying are her attempts to sell the reader on her gaming knowledge. In what are clear info dumps instead of characterization, she goes on and on about "gaming discs"-hint, they're just called games--then proceeds to practically door-to-door salesman pitch an Xbox 360 console complete with the names of various games. I don't need to know the entire game library owned by the characters. Especially when it seems obvious the author probably walked into an electronics store for a crash course on gaming and has never touched a controller or played a game.

I found the writing incredibly poor. Lots of telling rather than showing, which is understandable for a new author, but downright unforgivable for a veteran author like Palmer. But what really killed this book for me was the fact that the author seemed to be writing from isolation. Like she was stuck in a cultural time warp experiencing life through someone else's eyes. That prevented me from connecting with the characters, the plot, everything. And ultimately caused this book to fail badly with me.