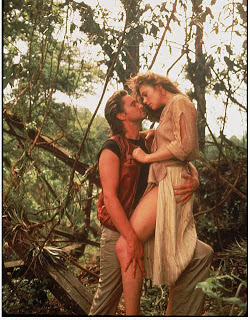 Despite its obvious reliance on stereotypes about romance novelists, Romancing the Stone remains one of my favorite films. It's funny, sexy, fast-paced, exotic and did I mention funny?

Kathleen Turner plays Joan Wilder, a single romance novelist who lives with her cat. She prefers to express her desires through her writing rather than taking chances in her personal life. That changes once Joan receives a package from her sister mailed from Colombia. To save her sister, she flies to Colombia with no clear plan of action.

Once in Colombia, everything goes wrong. She takes the wrong bus and ends up stranded in the jungle with no idea where to go. And there she meets Jack (played by Michael Douglas) who is nothing at all like her romance heroes. He's rude, he's crude, and he only agrees to help Joan get to her
destination in return for payment.


What Jack thinks is a simple job of escorting the lost, clueless, and hopelessly naive lady back to civilization turns into a dangerous treasure hunt as the people who kidnapped Joan's sister come after her.

While the sad, lonely cat lady persona is a bit irritating, I really loved that the movie challenged the notion of who, exactly, reads romance novels. And the on screen chemistry between Douglas and Turner is scorching hot. The film also stars Danny DeVito in one of his funniest roles.

Although the movie was inspired by the romance genre, you can see its influence in many of the romantic suspense/adventure novels that were published after the movie's release. This is a movie that most guys will watch with you--if only get a little ogling in over Kathleen Turner's legs. It's fun, campy, romantic, and silly. Perfect for summer.