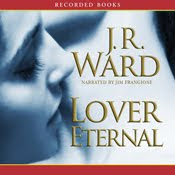 
As with all of my Black Dagger Brotherhood audiobook reviews, this is essentially a reread. I've read them all in print, but listening to them is a bit different.  This is one of my favorite BDB books, but I think the cinematic melodrama suffered a bit with the audio format.

Rhage is known as Hollywood within the Black Dagger Brotherhood ranks. He's a vamp who has sex often with multiple partners--sometimes in public--and is considered the playboy of the group. But his laid back attitude is actually a façade, carefully crafted to keep his darker nature in check. Because once he loses his temper, his curse takes over--turning him into a dragon-like creature with little sentience and no ability to tell friend from foe.

Mary is a cancer survivor and volunteer with the local suicide prevention hot line. Through the hot line, she meets a young mute orphan named John Matthew--who is actually a pre-trans vampire unaware of his biology and culture. Bella, Mary's neighbor and friend, recognizes what John Matthew is and contacts the Black Dagger Brotherhood...into whose world Mary gets thrust. There, she meets Rhage--who develops a fascination with her that he can't let go of.

One of the reasons I love this book is that it has some serious melancholy aspects to it. Some grab onto your tissue and try not to bawl moments. Which, normally, I'd rather not read or listen to, because who likes a stuffy nose and puffy eyes, really? But this book has such hit-you-in-the-gut angst that you can't help but read. And the characters. Sigh. I love the characters. I love that Rhage is forced to work at his relationship with Mary. That his good looks, charm and obvious money are turn offs for her which he has to overcome.  Nothing is easy with this book. Nothing is instant either. It takes time and effort. Which makes this one more real than so many of the paranormal books which feature instant relationships often preceded by instant sexual activity.

The narrator, again, takes some getting used to. He sticks with the series, though, so if you're listening to them in order, there's no need to adjust to a different reader. He doesn't vary the voices drastically between brothers (it's subtle, but it is there) but it is a nice, pleasing voice that fits with the sheer...masculinity embodied by the BDB. And, thank goodness, he doesn't employ a falsetto voice for the female characters. He does soften his tone, but no falsetto. I've had stories ruined by male narrators who did that.

The beginning of the story seemed cheesier than I remembered. I think a large part of it was that it just didn't translate as well to the format. Midway through, though, it really started to become less cheesy and more emotional.

Overall, this was almost as good as I remembered it. And I still had to grab the tissues near the end. *sniffle*