Hump Day Summer Movie: The Lady and the Highwayman (1989) 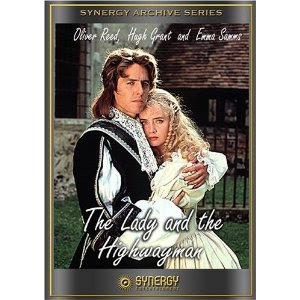 Today's Hump Day Summer Movie is a made for British TV movie: The Lady and the Highwayman. Based on a romance novel by Dame Barbara Cartland, this movie is the height of cheesy romance cliches filled with bad lighting, bad dialogue, bad music, and downright awful hair.

It stars Hugh Grant with his worst hair ever. Some kind of Billy Cyrus meets Prince Valiant mullet. And Lysette Anthony as Panthea Vyne does her best doe-in the headlights immitation. Or mutant Shirley Temple. I'm not really sure.

Part of the daytime drama feel (aka soap operas) can be attributed to the snake like presence of Ms. Emma Samms--veteran actress of not one but two melodramatic series.

She's not much of a panther. But she is a panter. Which I guess makes that name apropos. (It really refers to being 'of the gods' but still. Horrible name.)

Much of the movie features Hugh Grant riding around on horseback. Or punching someone. And he really doesn't look good doing it. I didn't think anyone could look bad wearing a highwayman mask, but he managed it. The man has no nose. Or at least not enough of one to pull this look off.

So why is this movie, so patently bad, a summer movie rec? Because there aren't that many romances that are this bad. It's almost a rite of passage to watch this thing. And because there's nothing more fun that watching a so-bad-it's-funny film and supplying your own dialogue. Make extra popcorn, because you just may find yourself throwing some at the screen.

On the plus side, though, there are some beautiful costumes and some lovely scenery. But honestly, muting the tv and making up your own lines might be better.

For those too scared to actually watch the film, here are my real time notes as I recently rewatched this. Warning: Spoilers contained below!!

"If anything happens to me take care of my sister "...hit you over the head foreshadowing. Asking to get killed.

Decoy King upon Charles II escape from England. Going around in circles on horseback. 5 minutes

Tax man Mr. Dryesdale forcing a marriage to Panthea to save her brother with a pardon. Brother had been dead 2 weeks already.

Tries to rape her in the carriage. Murders her dog.

Interrupted by Highwayman (Hugh Grant manages to look horrible in black mask. No nose to speak of)

Lucius: “You are not fit to live. I would shoot you where you stand. But that is not my way.”

Bad guy says, “Gallantry is for fools” then he dies. Lucius: “Rather a poor choice for a man’s last words”

Gaze soulfully at each other.

Picturesque ride on horseback together with romantic music.

Lucius and Panthea are cousins. How close?  Ick.

Silver Blade sneaks in to watch from afar--err stalk. And, of course, pulls down mask.

Countess is snubbed with cut direct by aunt. In public.

She sicks Sir Phillip Gage on Panthea in hopes of uncovering something scandalous.

Daytime TV melodrama. Her breasts look ready to pop out of corset.

Panthea figures out that cousin Lucius is highwayman who rescues her.

Smolders with memories of night he saves her.

Panthea saves Lucius from being arrested.

Panthea is arrested for murdering her husband and sentenced to die. Lucius rescues her. Lucius is captured during attempt.

Rudolph (Randolf)?--whatever the hell his name is-- steals ring Lucius tries to give maid to give to the king.

Randolf (Rudolph) wears the ring to audience with the king.

Saved by king. (of course everyone stops fighting in front of HIS MAJESTY.)