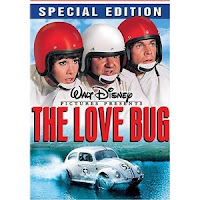 My youngest child is obsessed with vehicles. Enthralled by anything that moves. And his most recent fascination is Herbie, The Love Bug.

It's very over the top and silly, but my favorite parts are the glimpses of popular history we see in the film. The love interest, played by  Michele Lee, is an automotive salesperson. A professional. A far cry from the usual stereotype we see of women in "female" careers of secretary or teacher in the 1960s. There's also a brief scene featuring some stoned hippies--which I thought was pretty funny when you think about Disney and their usual lack of humor re: anything racy. Their "altered" state is implied rather than shown, though, so maybe that's how they got away with it.

This is a timeless family movie--and especially great for those with car obsessed sons. It has some depth, lots of humor, and a very cute car.
Posted by Amber at 10:04 AM