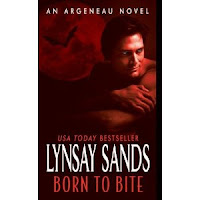 I would call this one Vampire Gone Country. It has all of the Argeneau trappings we normally see, except this one is set in the farmland of southern Canada.

I keep hoping for the old Lynsay Sands. The one who wrote laugh-out-loud books for Dorchester. Not the slightly amusing romantic suspense books with vampires in them she seems to write for Avon.

Given the recent problems with Dorchester, it seems Sands made a good move to leave them...but did she have to give up her signature style as well? I don't know if it was pressure from the publisher or a different editor, but every single book since she joined Avon has been...meh. I used to love the Argeneau series. Single White Vampire is probably the funniest paranormal romance ever published. The books since Sands's move to Avon are far too serious to be funny and not gritty enough to be good Urban Fantasy.

There are too many characters in this book and too much backstory (If you haven't read the previous books, don't start with this one!) There's nothing here at all that is surprising or engaging. It was a decent read, but the romance doesn't develop so much as appear and the whodunnit aspect is very predictable. Fans of the series will probably like this one, but Sands has written far better books than this one.