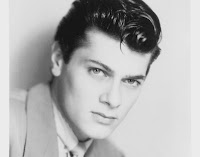 I was saddened to hear last week that actor Tony Curtis had died. I grew up watching so many of his films. Not only was he gorgeous in that silver screen larger than life way,  he was incredibly funny.

Curtis's comedic genius is often cited in Some Like It Hot, a gender bending comedy co-starring Jack Lemmon and Marilyn Monroe. But for me, the quintessential Curtis movie is Operation Petticoat.

Also starring Cary Grant, Operation Petticoat is one of those films I think has held up well over time. Curtis plays a recreation officer turned supply officer who uses questionable methods to procure necessary supplies for a submarine during World War II. It's really a subtle role, where the humor is often situational and delivered in a dry, sarcastic and backhanded way.

In this movie, Curtis has that scoundrel air about him: the not quite a good guy but you love him anyway vibe. And that, I think, is what defines Curtis as an actor for me. He doesn't play the heroic good guy. He plays the reluctant one.