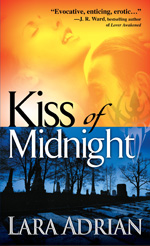 I've been hearing from several people (including my mom) how great the Breed series is by Lara Adrian. After reading the first book in the series, Kiss of Midnight, I'm not sure what everyone's raving about. I thought it a mediocre book that doesn't really add anything to the vampire romance subgenre. Sure, there are aliens, but other than that? Eh.

Plus the last 30 pages or so nearly strained my poor little eyeballs because I just couldn't stop rolling them. Sappy dialogue, a TSTL heroine, and an jerk for a hero. I thought the characters were well done other than the last minute (and completely unbelievable) attitude adjustment for Lucan. I just don't see this as anything other than a passable but not wow-worthy vampire book. Maybe the newer books in the series are better?

INSATIABLE DESIRE. ENDLESS SEDUCTION. ONE TOUCH IS JUST THE BEGINNING.
He watches her from across the crowded dance club, a sensual black-haired stranger who stirs Gabrielle's deepest fantasies. But nothing about this night--or this man--is what it seems. For when Gabrielle witnesses a murder outside the club, reality shifts into something dark and deadly. In that shattering instant she is thrust into a realm she never knew existed--a realm where vampires stalk the shadows and a blood war is set to ignite.

Lucan Thorne despises the violence carried out by his lawless brethren. A vampire himself, Lucan is a Breed warrior, sworn to protect his kind--and the unwitting humans existing alongside them--from the mounting threat of the Rogues. Lucan cannot risk binding himself to a mortal woman, but when Gabrielle is targeted by his enemies, he has no choice but to bring her into the dark underworld he commands.

Here, in the arms of the Breed's formidable leader, Gabrielle will confront an extraordinary destiny of danger, seduction, and the darkest pleasures of all . . . .