Review: A Beginner's Guide to Rakes by Suzanne Enoch 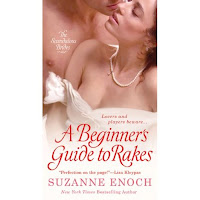 Let's just get this out of the way: the title, A Beginner's Guide to Rakes,  has zip to do with the story. Nada. Zilch. Squat. It's a throwaway title. And that pisses me off a little because this plot could have had so many good titles for it. Some hint about the contents. But...no. There is no guide. And the "hero" isn't really a rake, either.

The basic premise: a destitute widow blackmails an old lover into funding her plans for a gaming club. The club, the Tantalus Club to be precise, is located in the downstairs portion of her only remaining residence, having sold all other property to settled her deceased husband's debts.

When I heard Enoch was moving to a new publisher, I was, quite frankly, a bit worried. She has a unique voice. Her characters are nearly always smart, witty, and give as good as they get. That isn't missing here, but the book as a whole reads a little more bitter and sharp in tone than most of Enoch's backlist. There's very little real humor here. And nearly no family dynamic, which tends to soften some of the Enoch books.

Some people might have a hard time with Diane, our heroine. She's a bit unsympathetic. Not that our hero is any better. Even though she's supposed to be emotionally wounded etc etc, I felt like she was nearly emotionless. Perhaps a few scenes showing her vulnerability might have helped, but as it was, I had a difficult time believing she would soften towards the hero, Oliver, no matter the inducement.


(Also, I was a bit squicked out to have h/h essentially barter about a sexual encounter. When one or both parties was still filled with antipathy towards the other. It's a personal preference, so others may not be bothered by it, but I prefer at least some level of respect before our lead characters get nekkid.)

I have to say that while I enjoyed the banter, which at the beginning was so laden with vitriol I had a hard time believing Enoch wrote this, I found some of the dialogue to be a bit anachronistic. I can't pinpoint which phrases, while probably correct, felt modern, but it was an niggling irritation. Which is weird since I'm not usually bothered by that in most historicals. It could be just because most historicals don't have so much dialogue in them all at once. I'm not sure. But it did rip me out of the story a time or two.

The pair are constantly fighting: Diane shoots the hero in the arm, throws a candelabra at his head...not to mention the nonstop verbal assaults:

"I'm afraid the detriments of your character far outweigh the benefits of your body."
"You didn't think that then."
"I was stupid and lonely. Now I am neither. [...] I want you out of my private rooms."
"I'll  leave your rooms, he agreed. "For now. But I'll wager everything I own that I won't be leaving your thoughts. "
Arrogant Man. "No, both you and the rats in the cellar have my attention."


Overall, this was a well crafted  book with realistic (if irritating) characters.  But it's definitely not one of Enoch's better books. I hope the next few in the series aren't as biting in tone as this one is, because while I love the give and take of snappy banter, I didn't enjoy the shrillness of this book.

Disclaimer: I read this book in the middle of horrible reading slump. That may have affected my enjoyment of it.

All of London is abuzz with the return of the utterly alluring, recently widowed Diane Benchley. Will she remarry? What will she do with her late husband’s fortune? Sociey is shocked by her announcement—at the Grand Ball, of all places!—that she plans to open an exclusive gentleman’s gaming club in the family mansion. But no one is more stunned than the Marquis of Haybury, Oliver Warren.

Years ago, Oliver and Diane shared a private indiscretion. Now Diane threatens to reveal Oliver’s most ungentlemanly secrets…unless he agrees to help her. A notorious gambler—and rake—Oliver is overqualified to educate Diane in the ways and means of running her establishment. But striking a deal with Diane might just be the biggest risk Oliver has ever taken. This time, the only thing he has to lose is his heart…

Email ThisBlogThis!Share to TwitterShare to FacebookShare to Pinterest
Tags: B Reviews, Suzanne Enoch