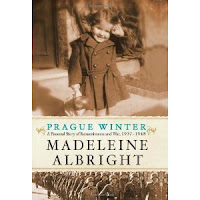 If you're like me, the most you know about Czechoslovakian history is tied directly to appeasement during World War II.  I knew just the bare facts about what happened: France and England allowed Hitler to take over Czechoslovakia without putting up a fight (effectively ignoring an alliance that should have protected the country), hoping that he would be happy with that and would not encroach further outside his current sphere of influence. And, as history tells us, that appeasement was a spectacular failure.

What I didn't know was what life was like for those living inside German-occupied Czechoslovakia. I didn't know why Hitler wanted that land, what ruses or justifications he used, or what happened after the West basically turned a partially blind eye to the problem. Prague Winter fills in those gaps with a wealth of research and knowledge in a way that incorporates the author's, former US Secretary of State Madeleine Albright, family history and background.

I've read plenty of history books, but I can't recall one that so carefully balances between a historical survey and a personal memoir. Each chapter ties in her family's place with the larger political and social context without giving short shrift to either.  It is both highly personal and scholarly.  Detailed, but almost conversationally written.

It's hard to express just how moving this book is without resorting to cliches. Because this isn't a cut and dried story about what happened during World War II. It's the story about what happened to a country and also a family.  The struggle for dissidents and Jews to leave Prague and find a country willing to take them. And it's a story filled with hard choices, political and moral cowardice, and some very gray areas of history.

This isn't an unbiased account of WWII Czechoslovakia. It can't be,  given the personal ties of the author. But it is that insight, found through genealogical research, old photographs, and interviews, that adds a much needed humanity to an event many of us learned about but never truly understood. I highly recommend this to anyone fascinated by World War II history.