By Friday, RT was starting to kick my butt. I had to pry myself out of bed for a quite lame party that consisted of breakfast. No info on the publishing house that "sponsored" it was there at all.

Following that I went to a series romance party hosted by authors in the Harlequin series imprints. After a brief introduction from each author, holding one of their covers, we played a brief game. 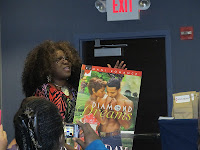 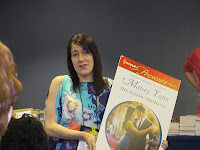 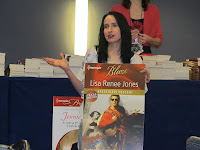 After the series panel, it was time for Red Hot Pictionary. Yes, this is a drawing of "spanking." 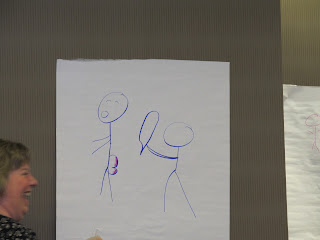 Followed by some Carina Press Bingo filled with romance themed words. If the word was from an author's book, they were asked to read a short passage. 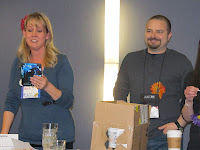 Following that was the RT Awards. It was 2 hrs of speeches and presentations. Kinda boring for readers, but I could see it was special to many of the recipients. Especially Loretta Chase who seemed surprised so many readers loved her books. And, of course, there was JR Ward who received her best Vampire Romance award.

I admit, the sight of a bodyguard around JR Ward made me wonder (cynically) whether it was an affectation (although I wouldn't be surprised if she had received threats.) My only issue was with the tiny nature of the bodyguard. He was not much of a deterrent, because he was a full head shorter than JR. Maybe he had ninja skills? Then, there was #peegate. I'm not going to link to it, but you can read all about it on Twitter.

After going stone-cold sober to a Heather Graham event last year, I decided to at least grab a margarita this year. Not. Enough. "Talent show" dinner theater with "singing" and "dancing" from authors and RT leaders. You could hear giggle-snorting around the room from the newbies who didn't know to expect something wacky and over the top. 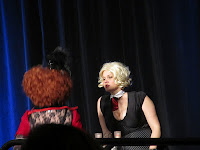