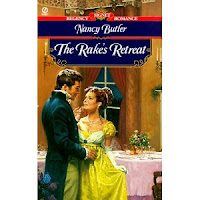 I admit, this month's theme was a bit of a real challenge for me. I don't have that many books pre-2002 that remain unread. I've either read them, donated them, or sold them. But I found this traditional Regency lurking in a a random pile and decided it would work just fine.

I'm not really a category reader; I tend to like longer books. Which also makes the Regencies sometimes a problem for me. They're fairly short, too. But like categories, a skillful author can make me forget how short the book really is, and that's what happened with the Rake's Retreat.

The book opens with a murder. And a really annoying teenager. Since I didn't really read the blurb, I had a brief moment of panic that our heroine was going to be a feather-headed teen. Instead, she's a 29 year old spinster named Jemima. Yes, that's her name. And yes, it took me a bit to get past imagining her as pancake syrup. (The name is Biblical, but honestly, I've only ever heard it used re: Aunt Jemima syrup).

I really liked how strong the author's voice is. And how she doesn't pull any punches about the hero's past. This isn't a simple little book where the conflict is a small little difference in station. There's a wide gap in experience between our infamous libertine and our sheltered spinster--although Jemima isn't shy about snapping back and letting her feelings be known. Although Beecham Bryce fills the flawed hero role well, Jemima is the stronger character. I loved the humor revealed through her, especially about what she feels is 'encroaching middle age.'

She had become uncharacteristically vain, searching for gray hairs in her dressing table mirror. And worst of all she had started sniffing at things people said, and humphing and tsking to beat the band.

In light of those clear signs that she was slithering into old maidenhood, a heavy languorous ache in her nether regions seemed almost like something to rejoice over.


There's also the murder, which is interwoven throughout the story, but the investigation takes place largely in the background. We get to meet the magistrate, a Bow Street Runner, our heroine's famous poet brother, and a few odd secondary characters. What amazes me, really, is that the story doesn't feel crowded or overwhelmed.  I'd have to read it again to see how Butler pulls it off with this small page count, but there's enough story here for a 400 page book, but it's told in just over 200.

What surprised me the most about this book was the sexual tension. It was incredibly well done, and far more detailed than I was expecting for such a short book. Small moments of sensual discovery are shown in scene after scene. There is no hurried 'awakening' here.

"There's nothing idle or meaningless about what I say to you." He compounded the effect of his words by leaning forward and slowly brushing his chin over her cheek.


She had never felt anything so remarkable—the slight rasp of his skin against the soft planes of her face left a shivery trail of fire.


The book isn't without flaws, though. There's some disjointedness here and there, some hit-you-over-the-head foreshadowing, and the ending is a little strange with its abrupt change of heart and a big "reveal" about the hero.  It uses a device I've seen over and over in books, but given this one is over 10 years old, I'm going to assume it wasn't as tired then as it is now.

*This book won RWA's RITA award for Best Regency back in 2000.

One fragrant June afternoon, Lady Jemima Vale too her canvas stool and sketchbook to the sunny countryside with the intention of drawing a pleasant view of some aspens. But what she saw made her heart lurch. From across the plain came a ruggedly handsome rider ...and a girl in distress!

Jemima was aghast to discover that the man was Mr. Beecham Bryce. Bryce had cut a swath through the ton since before she had made her comeout, and his name was a byword for all that was licentious and low. Now, he was escorting a traumatized young girl who had just witnessed a shocking murder! Jemima felt obligated to accompany the two to Bryce's estate the poor child should not he unchaperoned in the company of such a rogue ....

There, at his baronial manor, they were safe from the killer. But as the scandalous incident brought Jemima closer to Bryce, she found that it was her heart that was in danger...from her own desire.
Posted by Amber at 8:23 AM