Summer in the Mountains 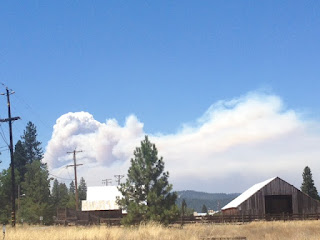 We've been really lucky this year that the fire season has held off. Winter was short and dry, with no snow pack and very little rain.

Our luck ran out  last week, with not one, but TWO fires in our National Forest. One was to the east and quickly contained. The other, with the smoke plume shown here, is currently out of control and burning in a steep, windy canyon about 20 miles west of our little town.

The smoke is so bad that it is affecting the Central Valley of California and Northern Nevada, too.

We have some terrific wildland firefighters out west. And already, we're seeing crews from Nevada and all over California heading in to fight this fire. I'm hoping they get a handle on this quickly, because when the smoke settles in the valleys at night, it's like breathing mud. *fingers crossed*