The Most Stubborn Fire in the Known Universe 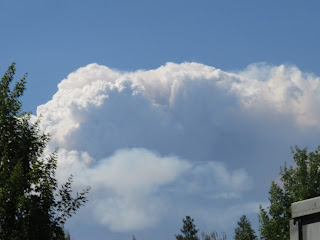 For those who haven't been following the incessant tweets, retweets, links I've been posting on Twitter, here's what's going on: We have one gigantic fire in our area. I am safe, aside from the horrific air quality that has forced everyone to stay indoors since the fire began at the end of last month.

Firefighters are having a heck of a time stopping the north-eastern spread of the fire. And that means it's burned up to the shores of a very popular reservoir camping area and is headed towards some small (I mean tiny) towns. If you are in Northern Nevada or Northern California, you're likely being impacted by the smoke from this fire. It has now burned more than 70 square miles.


Worse, still, is that there are dozens of stubborn fires across the west. There's another stubborn one just north of ours in Lassen Volcanic National Park. There's a huge one along the eastern edge of California that has topped 200,000 acres. It's like living inside Inferno this year in the National Forest. And resources from all federal, state, and local agencies are stretched so, so thin.

Our last big fire was in 2007. Since then, a lot has changed.  In addition to information easels with maps set up in front of every grocery store, post office or other meeting place, there is an extensive use of social media this fire season.  Inciweb is a clearinghouse for fire info. You can find out fire fighting strategies, acres burned, evacuation notices by yourself without waiting for a press release to filter through your local news station. Our fire has its own Twitter feed and Flickr photostream.  There are videos of the fire on Youtube. Having quick access to information eases some of the helplessness many in our county are feeling.

A big thank you to all of the firefighters, support crews, incident commanders, information officers, and others who are doing their best to get a handle on this fire. We appreciate your hard work. We know that the terrain is rough. Fingers crossed we see full containment soon.
Posted by Amber at 9:15 PM