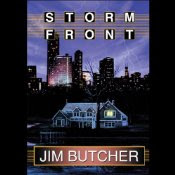 A few months ago, I asked people on Twitter for audiobook recommendations for my husband. He listens to many of my romance audiobooks, but he really likes Fantasy and Urban Fantasy. The Harry Dresden series by Jim Butcher came highly recommended.

Fast forward a few months.  I purchased the first in the series, Storm Front, on Audible. And while my husband has so far not been interested in listening to it, I decided to give it a try.

I was surprised by how much this book read like a detective novel. Not quite Columbo with a magic staff, but close. Told in the first person, we follow along with Harry as he attempts to solve a case as a consultant for the Chicago PD, and as he takes a side job working as a wizard-for-hire.

Harry is unassuming, self deprecating, and old fashioned. I really love how fully developed his character is. The first person narration really works, because the main character is aware of his own foibles and isn't afraid to share them as part of the story.

I did have a few issues with Harry's horrible habit of getting himself into danger. For someone so smart, he often exhibits a profound lack of common sense. If this were a romantic suspense novel and he was the heroine, he'd get slapped with the TSTL label a few times. There didn't seem to be a really plausible reason for Harry to go off investigating without any kind of safety net.

Despite Harry's wizardly abilities, the magical elements of the story are not the main focus. They're a tool, a resource, that Harry uses. And they're the murder weapon. But they take a back seat to the traditional private investigator methods of following leads and annoying people.

There are some production issues that detract from the overall experience. The worst of which is the lack of finesse in the sound editing. You can hear swallowing and weird pauses when the narrator reads. The breathiness that I assume is part of the performance, can also be distracting. This is pretty typical of other audiobooks produced at the same time, but it IS noticeable.

Still, I enjoyed this enough to download the second in the series, Fool Moon.

*As a completely unrelated bit of trivia, James Marsters (who played Spike on Buffy,) is not only not British, he was born up here in my neck of the woods. Small world.

Audiobooks not your thing? The series is available in mass market paperback and ebook, too.

My name is Harry Blackstone Copperfield Dresden. Conjure by it at your own risk. I'm a wizard. I work out of an office in midtown Chicago. As far as I know, I'm the only openly practicing professional wizard in the country. You can find me in the yellow pages, under Wizards. Believe it or not, I'm the only one there.

With rent past due and a decent meal becoming an issue of some importance, Harry needs work, and soon. A call from a distraught wife, and another from Lt Murphy of the Chicago PD Special Investigation Unit makes Harry believe things are looking up, but they are about to get worse, much worse. Someone is harnessing immense supernatural forces to commit a series of grisly murders. Someone has violated the first law of magic: Thou Shalt Not Kill. Tracking that someone takes Harry into the dangerous underbelly of Chicago, from mobsters.