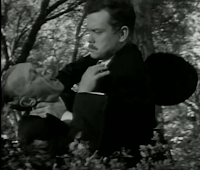 I decided it was time to let (force) Oldest watch some film noir with me. After all, he's a bit of an unhappy ending junkie (not really sure how that happened since I tend to be all about HEAs myself). This is his cultural education we're talking about. His grandma has already perverted his film education with Godzilla and Mothra marathons. I've gotta do something!

Enter, a quick Google search of Film Noir classics. Every week, I'm going to torture  treat him to a new-to-him classic movie. I might even let him eat some junk food while we watch. I'm a cool mom, sometimes.

We're starting with The Stranger. Just because. I think we can mock the way nobody in this film is able to follow anyone else with any semblance of stealth. Plus I can sneak in some historical reference points, too.

You can find it on Amazon Prime for free or, if you're not a Prime member, for rent.

Here's the synopsis: The great Orson Welles directed and stars in this tense thriller about as a respected small New England town college professor who will stop at nothing to conceal his shocking and deadly past.
Posted by Amber at 10:36 AM