Review: Always on My Mind by Jill Shalvis 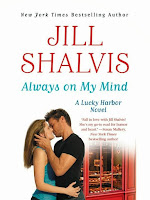 I'm a big, unapologetic Jill Shalvis fan. Her writing voice perfectly matches up with my reading preferences: funny, occasionally sarcastic, sexy, genuine, and a little off-kilter. I'm so happy that her Lucky Harbor series is getting the attention it deserves (although I wouldn't say no to more Wilder books. *ahem*).  The newest in the LH series, Always on My Mind, is one of my favorites. It's a friends to lovers story, my absolute favorite-est trope in all of Romancelandia. And it has baking in it. Anyone who knows me even just a little will understand why that appeals. (to continue reading, click on Read More below the recommended posts)


Leah has returned to Lucky Harbor after completing her appearance on a reality tv cooking competition to help her grandmother run her bakery while she recovers from knee surgery. Stuck in a rut and unsure of her future, she experiments with recipes and keeps everyone addicted to lots of sugar. And quietly pines for local firefighter Jack Harper, who is quite firmly in the 'friend' zone. Things change quickly, though, when a misguided impulse to cheer up Jack's mother turns into a massive deception that has her in a fictional hot and heavy relationship with Jack.

I loved watching Jack and Leah fall in love.  Shalvis gave us enough backstory here to understand why these two people, who had maintained a friendship over years and years, would deepen that relationship.  And is typical with the rest of the Lucky Harbor series, there's plenty of matchmaking, interfering, and general nosiness from the rest of the town to provide some hilarious episodes along the way.

In the background of the romance is an arsonist mystery, which has the entire Lucky Harbor community on edge as building after building goes up in flames.

The "big lie" in this one felt a little thin—and old fashioned—but it was redeemed somewhat by having everyone but Leah and Jack aware of the "deception." I also didn't really feel like the arson storyline meshed as well as it could have with the rest of the book. It's probably because I've seen too many Criminal Minds episodes, but that wasn't the least bit mysterious or suspenseful. Granted, this isn't romantic suspense, but it felt out of place given the tone of the rest of the book.


THERE'S NOTHING LIKE THE REAL THING
After dropping out of pastry school and messing up her big break on a reality cooking show, Leah Sullivan needs to accomplish something in her life. But when she returns home to Lucky Harbor, she finds herself distracted by her best friend, Jack Harper. In an effort to cheer up Jack's ailing mother, Dee, Leah tells a little fib - that she and Jack are more than just friends. Soon pretending to be hot-and-heavy with this hunky firefighter feels too real to handle . . .

No-strings attachments suit Jack just fine - perfect for keeping the risk of heartbreak away. But as Jack and Leah break every one of their "just friends" rules, he longs to turn their pretend relationship into something permanent. Do best friends know too much about each other to risk falling in love? Or will Jack and Leah discover something new about each other in a little town called Lucky Harbor?