For those who weren't on Twitter Sunday morning, here's the recap: it was a busy, tragic weekend for my town. We lost 4 businesses to a catastrophic fire that burned most of a block in our historic downtown.  No one was injured, but it was a major blow to a town whose tourism dollars rely on our quaint, old-fashioned atmosphere. And for those who live here, it was a part of what made our town special.

It was so bad that we made the Sacramento news, and most people in Sac couldn't find us with GPS.

I vaguely remember hearing sirens blaring in the wee hours of the morning, but assumed it was some dumbass who had crashed on the icy curves just outside of town again. Little did I realize that the sirens were headed into town and that part of our town's very identity was burning to the ground.

Our fire department is 100% volunteer, as is nearly every other department in the county (many other communities responded to our fire, bringing the total number of personnel to over 35). And they stayed on site in the freezing cold for hours. It was so cold that water was turning to ice as it hit the streets. Even now, there are huge icicles inside on the charred timbers. 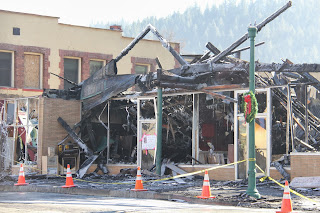 As the news spread through social media, you could feel the stunned disbelief and sorrow. Families who grew up here and had moved away were just as shocked and saddened as those of us who still live here.  The Pizza Factory, where the fire originated, was more than just a chain restaurant. It had occupied the same location for decades. The walls were adorned with jerseys of high school and community college players. Our elementary school principal's photo was there with her high school softball team. Artwork from artists who have moved on to bigger and better things were there. Little pieces of the town's history for more than a generation are now gone.

We're all still a little wounded by this loss. I know families coming in for the holidays are going to be hit by this the second they round the corner onto Main. 4 businesses may not seem like much, but in a town our size, it's devastating. Part of being from a small town like ours is the idea that nothing is going to change. The businesses might change owners, but the buildings themselves will always be there. That's no longer true.

Before the fire was even out, there were offers to help clean up. Offers to share or donate retail space. Discussions for how to help not just those businesses that were destroyed, but those that were damaged by water and smoke. And despite the loss, we were all collectively grateful for our firefighters and what they managed to do. Most importantly, they saved the two oldest buildings on the block and no one was hurt.

Our downtown is not going to be the same for a long, long while, but we are already coming together in a way that reminds me of why I love this place. It's not the buildings. It's the people. People like the owner of the thrift store that was adjacent to the pizza place.

The only thing left of her shop are her prized action figures she had behind the counter. Firefighters saved those, and she is already in the process of reopening—1 day later— in an empty retail space just down the road.

It's going to be a bittersweet Christmas this year, but I'm left feeling extremely proud of my community.