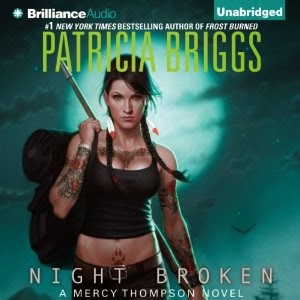 I can't think of anything worse than having your husband's ex wife move into your home (that used to be hers). But that's what happens when Adam's ex-wife Christy is threatened by a stalker.

Part of the problem for me is that the forbearance shown to Christy by everyone in the pack (including Adam) gets really old after only a minute or two. Chapter after chapter of her manipulations made this difficult to get through. And because it's so very subtle most of the time, the pace is excruciatingly slow during huge chunks of the book.

I also had an issue with the way Mercy is brought into a criminal investigation. It felt forced, as if the success of that move in the Alpha and Omega series necessitated the same type of consulting in the Mercy series. But it doesn't work. Not for me.

My primary complaint about River Marked, the lack of supporting characters, is also one of my main complaints with Night Broken. While we do get to see Tad and Stefan, it's only for very brief cameos. In Stefan's case, he literally pops in and out.  Instead, we get scene after scene with Coyote. Meh.

Night Broken is ok. It's not awful. But it definitely didn't wow me. Maybe I would have enjoyed this one better in print, I'm not sure. Briggs has had a few misses with me (River Marked!) but in this case, the story just feels tired. I wanted some forward momentum for Mercy in terms of her relationship with the pack and with Adam, but I honestly don't see that here.

Narration: Lorelei King did great as always. The voices sounded the same as they've always been. Christy's tone was grating, though, which was probably the point, but it made for difficult listening.

An unexpected phone call heralds a new challenge for Mercy. Her mate Adam’s ex-wife is in trouble, on the run from a stalker. Adam isn’t the kind of man to turn away a person in need—and Mercy knows it. But with Christy holed up in Adam’s house, Mercy can’t shake the feeling that something about the situation isn’t right.

Soon her suspicions are confirmed when she learns that Christy has the furthest thing from good intentions. She wants Adam back, and she’s willing to do whatever it takes to get him, including turning Adam’s pack against Mercy.

Mercy isn’t about to step down without a fight, but there’s a more dangerous threat circling. Christy’s stalker is more than a bad man—in fact, he may not be human at all. As the bodies start piling up, Mercy must put her personal troubles aside to face a creature with the power to tear her whole world apart.