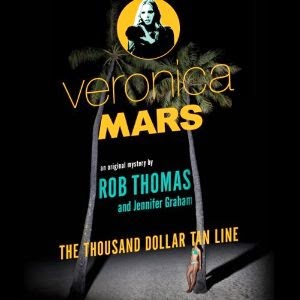 Since life has gotten ridiculously out-of-control busy the last few months, I'm left with just listening to audiobooks to wind down at night. No time to actually read. As a fan of the series, and of mysteries, I was excited that they were coming out with a Veronica Mars mystery. I mean, the series is noir already, right? Unfortunately, it doesn't translate to audio well.

Set just after the recent Veronica Mars movie, the book opens with Keith Mars still recovering from his car accident and Veronica holding down the fort. It's not going well and cases are few and far between. Until the local Chamber of Commerce hires her to find out what happened to missing college coed on Spring Break.

As far as mysteries go, the missing Spring-Breaker isn't all that original. I must have read the same set up a dozen times over the years. I really wanted a lot more character interaction than I've gotten so far. It's dragging! (I'm a little over 3 hrs in).

The absolute biggest mistake the production team made was having Kristen Bell narrate this. No offense meant to Bell. It's not that her voices stink (although they do), it's that the book is written in the third person. After watching 3 seasons and a movie of Veronica Mars being told with Kristen Bell's first-person voice-over, this switch just doesn't work.

I'm not sure if I'm going to finish this book or not. Right now, it's an excellent way to fall asleep, but not really all that compelling otherwise. Meanwhile, I'm hoping that I can actually read a book on the plane to the RT Convention in New Orleans.
Posted by Amber at 8:08 AM