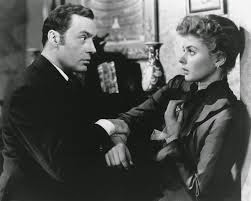 There are creepy movies, like last week's Wait Until Dark, that show criminality, greed, and desperation. Then there are movies like Gaslight that show just how subtle evil can be.

Ingrid Bergman didn't shy away from challenging roles, and this one is no exception. She plays Paula, a young woman who has suffered trauma upon finding her famous aunt's body as a child. She's sent away to school and returns to London 10 years later. Recently married, Paula is uncomfortable in the house and unsure of her relationship with her husband.

What follows is probably the creepiest, scariest act of evil as Paula is ever-so-slowly isolated from everyone by her husband. He limits her outings, spreading tales of how "fragile" she is. He avoids contact with the neighbors. He lectures and belittles Paula. And then he begins a campaign to slowly drive her insane by pretending that she's forgetting things, losing things.

What makes it so scary is that this is a classic set up for domestic abuse. It's a classic example of emotional abuse. And this was filmed in 1944.

Angela Lansbury, in her first big role,  plays a perfect accomplice. I love how even with her thick accent, she still sounds so very much like Angela Lansbury.

If you haven't seen Gaslight yet, you're missing out. It's a fantastic—if creepy—classic.
Posted by Amber at 5:00 AM