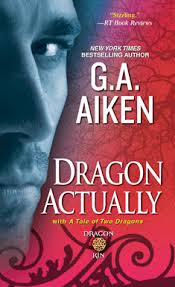 Ok, so I cheated with this one. I DO have this book in print somewhere in my TBR, but since that book is currently boxed up and inaccessible, I bought a copy last month in e. *hangs head in shame*
But once I do find the print copy, I think I can finally let go of it, share it, pass it on.

I have several G.A. Aiken books in my TBR. The newer ones are *not* boxed up, and I suspect I'll be reading those shortly. This one I picked up because my RT Convention roommate shamed me into it. I LOVE Shelly Laurenston's books. And yet, for some reason, I had not read her as G.A. Aiken. There's no real explanation other than they didn't really appeal the first few times I picked them up. I love funny books, and this author is ALWAYS funny.

One thing that sets Aiken's (and Laurenston's) books apart from the crowd is that her women characters are not afraid to be bitchy. Most often, they revel in it. They are usually, although not always, tough physically AND mentally. Most of the stories are about how finding love lets them be vulnerable, and this one was no exception.

Annwyl knows she's going to die. Her only regret is dying before she has a chance to kill her nasty, evil brother. So she's surprised when she wakes up after being injured and finds herself in the company of a dragon named Fearghus. Fearghus happened upon her as she was about to die, incinerated her few surving opponents, and did some quick magical chanting to help keep her alive until his sister, a healer, could patch her up.

The two build a friendship of sorts as she heals. Fearghus loves her sharp tongue and fearlessness. Eventually, he decides that she needs to hone her fighting skills if she is to survive a battle with her much better trained brother. And since the ability to shift into human form is a well kept secret, he doesn't tell her that HE is going to train her. Instead, he appears in human form as a stranger sent by himself. (It's complicated).  It's an old trope given new life: Annwyl finds herself falling in love with two "people": the dragon and the knight.  And he, of course, finds excuse after excuse to not tell her the truth about his identities.  It's so ridiculous that even his sister calls him on it, then proceeds to meddle because she's his sister and can't help herself

The internal conflict is pretty thin and the external one is complicated in that way fantasy worlds can be. There's a ton of humor in this book as expected. There is also a bit of gore. If you like Shelly Laurenston's books, you'll probably like these. They are set in a fantasy world with a Middle Ages feel, but the humor, dialogue, and sass is classic Laurenston.

Also included is a prequel novella which I loved nearly as much as the "main" story. All in all, more than enough to get me to continue the series.

It’s not always easy being a female warrior with a nickname like Annwyl the Bloody. Men tend to either cower in fear-a lot-or else salute. It’s true that Annwyl has a knack for decapitating legions of her ruthless brother’s soldiers without pausing for breath. But just once it would be nice to be able to really talk to a man, the way she can talk to Fearghus the Destroyer.

Too bad that Fearghus is a dragon, of the large, scaly, and deadly type. With him, Annwyl feels safe-a far cry from the feelings aroused by the hard-bodied, arrogant knight Fearghus has arranged to help train her for battle. With her days spent fighting a man who fills her with fierce, heady desire, and her nights spent in the company of a magical creature who could smite a village just by exhaling, Annwyl is sure life couldn’t get any stranger.