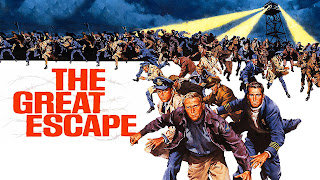 It's been a long time since I've posted a classic movie rec because I've been busily "binge" watching Supernatural. The quotes are because my internet sucks, so I'm binge-ing old school via DVDs. Anyway, I finally got far enough into my queue for some classics to pop back up, and I discovered The Great Escape.

I'm normally not a war movie kind of gal, so it's easy to see how I missed this one. But wowza! That cast! Even if you're not a movie buff, you've likely heard of some of them. Richard Attenborough (Hammond from Jurassic Park), Steve McQueen, Charles Bronson, David McCallum (Duckie on NCIS), James Coburn, James Garner, Donald Pleasence (The psychiatrist from Halloween)...

If you're a happy movie only kind of person, this is not the movie for you. There is lots of humor, but there are several sad parts and the ending is not overly optimistic...Of course, it's based on real events, so that is completely to be expected.

My only real issue was how long the movie was. The pacing was excruciating. I'm glad I watched it, though, and if you haven't seen it, you should!