Review: The Knave of Hearts by Elizabeth Boyle 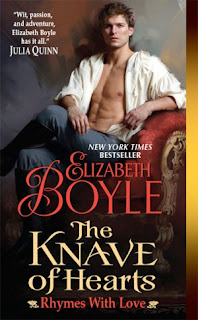 This is probably the least original set up I've read in a long time, but I still ended up enjoying this book enough to read it in one day. Twin sister is ruined when a drunk rake releases her in the middle of a dance, causing her to knock over several dancers and effectively ruin her chances. Rake responsible then bets a horrible jerk that he can restore her reputation and make her a "Diamond."  I must have read something similar a dozen times at least. Despite that, I found the book engaging and fun.

Boyle's style has always been light, but her newer books seem to have veered even further into that category. I'm not sure if Avon as a whole has been steering the ship in that direction, or if it's just my favorite authors. I wanted just a teensy bit more angst in this. Some true pain. Even so, it's not a bad book by any means.

My main issue is that I felt like I was missing some crucial subtext that (maybe?) were in other books in the series.  Also, I felt like Tuck's sacrifice for his family was completely glossed over in a throw away sentence or two. It was a vital part of his ruined reputation, his break with Wakefield, but Lavinia and the reader are told only the scant basics at the very end of the novel.

Overall a fun—but not really deep—story. Sometimes that's all you need.


In the fifth novel of the captivating Rhymes With Love series from New York Times bestselling author Elizabeth Boyle, a young woman's hopes of a match encounter a wickedly handsome complication . . .
Lavinia Tempest has been eagerly anticipating a spectacular season. But one disastrous pile-up on the Almack's dance floor derails all her plans. Add to that, the very stunning revelations about her mother's scandalous past have become the ton's latest on dits. Lavinia's future has gone from shining bright to blackest night in one misstep.
Alaster "Tuck" Rowland admits he's partly to blame for Lavinia's disastrous debut. But it's not guilt that compels him to restore her reputation. Rather, he's placed a wager that he can make Lavinia into one of the most sought-after ladies in London. Who better than an unrepentant rake to set society astir?
Tuck's motives are hardly noble. But in teaching the lovely Lavinia how to win any man she wants, he suddenly finds himself tangled in the last place he ever imagined: in love.