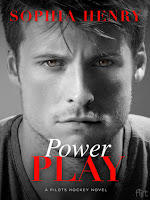 Yes, it's me, the tardy TBR person. I always seem to lose track of which Wednesday posts are supposed to be up by, and then life just seems to mess with me. Anyway, this month's theme is something different, and since I DON'T read NA, this one definitely qualifies.
***

I can't believe I'm saying this, but...there's not enough hockey in this book.

People who know me would be laughing at what I just wrote because I'm not a sports person at all. AT. ALL. I don't even watch the Superbowl, which is the one event even non-sports people watch. I watch my kids in their soccer games and that is it. But since this book has "A Pilots Hockey Novel" on it and features a hockey player as the hero, well...it kinda needed more hockey

This ebook-only story is category length, so I'm assuming it's supposed to be light on details, but even so...you'd think it would be centered around hockey. Not so. It's centered around a family grocery business which recently expanded to include a gift shop.  The narrator is our heroine, Gaby Bertucci, whose family has run the business in Detroit for generations, and she has a major crush on minor league hockey player Landon Taylor.  She flirts with him whenever he visits the store, but nothing happens until her father collapses of a heart attack while Landon is there. His quick thinking and calm presence force their interactions beyond the generic pleasantries they normally exchange and open the door for more.

I didn't hate this one as much as I expected to. I usually avoid NA because I have no interest in revisiting my college years and 99% of them seem to be written in present tense. Thankfully, this one is written in first person, past, and isn't about a college campus.

Of course, I didn't love it either, and a lot of that has to do with a rape that happens before the book begins and the weird way it's handled on the page. It doesn't come up until the characters are in bed together, and then Gaby proceeds to regurgitate all of the "it's my fault" stuff she is supposed to believe. Which is weird and not consistent with her character at all. This is followed by the disclosure by her father to her boyfriend (Landon) of a past suicide attempt without Gaby's permission or presence. I get that we are supposed to be annoyed by the paternalistic BS, but frankly? Gaby wasn't annoyed enough. That shit goes on for way too long.

Another tick in the negative column is that Landon seems like a whiny baby, and I wanted to ground him and send him to his room.

It could be standard NA fare, but the relationship in this book is secondary to Gaby's struggles to find respect with her family and a valued place of leadership in the family business. The romance is kind of bland and easy. The only drama comes from a too-easy-to-resolve misunderstanding. There's very little growth or depth there, and I was a bit disappointed by that.

While it didn't cure my distrust and distaste for most NA titles, Power Play was a quick, short story for anyone who doesn't want yet another college-set New Adult book.  It definitely isn't my style, but it was okay overall. Just not sure I care enough to try another one in the series. Maybe...


Beneath her innocent facade, Gabriella Bertucci has her reasons to be standoffish with guys. Especially guys like Landon Taylor, a star defenseman on the minor-league Detroit Pilots and the object of a serious crush since he first walked into her family’s market. But when Landon comes through for her in a moment of crisis, Gaby starts to wonder if there might be more to Landon than hard muscles and fast skates.

Landon isn’t afraid of telling Gaby that he’s got it for her bad. The problem is, she seems unwilling to believe it. And though Landon enjoys his reputation as a cool-headed athlete, he hates losing—both on the rink and off. It’s his competitiveness that makes him so damn good at what he does . . . but it also makes him just a little bit complicated.

One minute Gaby’s tempted to give in; the next, she’s getting cold feet. How can she trust a guy who’s destined for bigger and better things to stick around? Then again, when Landon pulls her close with those powerful arms, the only thing that matters is right now.