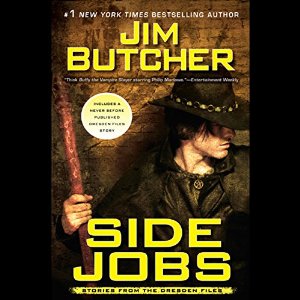 I've finally worked my way through the regular size novels in audiobook. That leaves the short stories and novellas, which are all out of chronological order, but that's ok. Basically: don't listen to them until you're done reading the series.

Because this month's TBR Challenge theme is "short," it lets me off the hook for finishing this in time, because this is an anthology. My commute is nonexistant, so my audiobook listening happens while cleaning or while winding down for sleep. Thus: FOREVER to finish the series. Hubs has had these read two or three times in the year or so I've been listening to them.


What I really like so far about this collection is the preface to every story. There's a little context provided for each work, so that you not only know where in the series this story falls, but why and when it was written, too. I like that Butcher is unafraid to share early works, being honest about its flaws, but wanting to let people hear it anyway. And I like that his publisher agreed to put these out as a collection, rather than making them languish in various anthologies spread across the publishing world.

The first story is his very first Dresden work. It's definitely more noir than the current incarnation, but has pretty much the same 'tude. It involves Dresden trying to safely return a runaway girl. There's some beasties and low level magic stuff, and we see Karen Murphy for the first time, which is neat.

The second is a vignette with Bob the skull and Harry bantering back and forth about his Yellow Pages advertisement. There's no real plot, and it's not very long, but it's a cute little extra.

The third stories involve the werewolves, a wedding, and some fairy magic. We see Karen again in her earlier role as Lieutenant. This one leans a little heavier on the backstory than I like considering I have kinda forgotten the novel the wolves are in.

Of the three stories I have listened to so far, they are all essentially like the extras on a Blu Ray: not necessary to the overall story arc, but fun to read anyway.

Recommended for Dresden Files fans if they've missed these, but otherwise, they won't make a whole lot of sense.