Review: Undone by You by Kate Meader (Chicago Rebels Book 3) 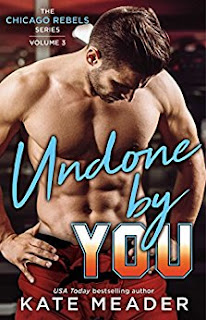 February was flu-city here in the mountains. My youngest was out of school for 2 weeks along with about 30% of the students and staff.  And while I managed to care for my entire flu-stricken family, I had largely avoided getting sick. Until just after Valentine's Day.

The only good thing about being sick is that sitting on the couch covered in a blanket is not only allowed, but encouraged. I glommed my way through so many books, but my favorites were the two hockey romances by Kate Meader that I practically inhaled.

I was also unreasonably cranky to discover that I had "caught up" with her publication schedule after book 2, and had to wait a couple of weeks for this book. It was absolutely everything I wanted, and MORE.


The Chicago Rebels are a team in trouble when the series opens. Their longtime owner has just died, and willed the team to his three daughters. Two know hockey, one not only doesn't know hockey...she doesn't know her sisters. The team has been playing horribly and is pretty much a laughing stock. Hidden in the will is the caveat that this team MUST make the playoffs or the daughters lose the team. So they make some radical changes, bringing in new players via trades and hiring a new General Manager: Dante Moretti, the first openly gay GM in the NHL.

We get hints in previous books that there may be something going on between Dante and Rebels player, Cade Burnett, but as far as everyone knows, Cade isn't gay.

I must say I was worried, because I usually have a serious issue with boss/employee romances. 99% of the time, they just don't work for me because I can see the lawsuits and power imbalances instead of the romance. I think because there are contractual issues here, and because Dante doesn't *really* have full freedom to hire and fire, it was less hinky. Plus we see Dante's ethics on full display, and there's an underlying trust that no matter what, he's a professional first.

This book was so emotional. Maybe more so than the others in the series, because the conflict here is entirely internal. There's no lingering injury, no worry about playoffs. There are so many layers here for a novella. I really appreciated the weight Meader gives to the obstacle of closeted/out relationships. It is a genuine, painful hurdle and it's handled with care.

The age difference didn't really bother me at all.

But what hit me hardest was the way we see how a decision to live closeted or out affects both main characters' relationships with their family. I appreciated that not everything is resolved in a nice, happy bow, because life often doesn't work that way. Fear of rejection from family is a big and realistic fear for many. Meader treats that with respect.

The romance itself is so sweet. Two very different types of men, but they complement each other perfectly, and the relationship is one you can see working 30 years in the future.

Now I'm impatiently waiting on Book 4 which doesn't come out until May. Boo.


Dante Moretti has just landed his dream job: GM of the Chicago Rebels. And screw the haters who think there should be an asterisk next to his name because he’s the first out managing executive in pro hockey. He’s earned the right to be here and nothing will topple him off that perch—especially not an incredibly inconvenient attraction to his star defenseman, Cade “Alamo” Burnett. Cade has always been careful to keep his own desires on the down low, but his hot Italian boss proves to be a temptation he can’t resist. Sure, they both have so much to lose, but no one will ever know...

As Dante and Cade’s taboo affair heats up off the ice and their relationship gets more and more intense, they’ll have to decide: is love worth risking their careers? Or is this romance destined to be forever benched?