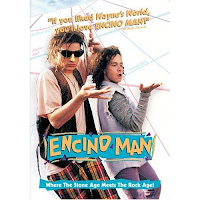 Ok, I'm stretching the definition of classic quite a bit here. Encino Man

came out in 1992 which means it is a mere 18 years old. But what makes this  a classic for me is the number of film quotes I have in my personal lexicon that came from this movie.


A few caveats for those who haven't seen this movie yet.

1. It is a teen comedy. Meaning it lacks a lot of emotional depth and the plot (as always) seems to revolve around girls and being popular.

3. It is not politically correct. Not even a little bit.

4. The plot is sheer farce and incredibly silly.


On the plus side, though, this is one of Brendan Fraser's first films. It also stars Sean Astin and Michael DeLuise. And although I usually dislike Pauly Shore, this is a part tailor-made for him.  The movie as a whole is charming, funny, and very memorable. Not something I often say of a teen movie.

The European version of the film was called California Man.