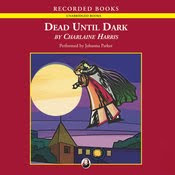 Sookie Stackhouse is small town bar maid living in the rural Louisiana town of Bon Temps. And she has a disability: she can read people's minds, hear their thoughts in her head.

Vampires have recently come "out of the coffin" to the general public, but Sookie has yet to see one. Until Bill, the Vampire, walks into Merlott's Bar. She's fascinated by him. And especially happy to learn that unlike regular humans, Bill's mind is a closed door.
Sookie's burgeoning romance with Bill the Vampire isn't the only thing on her mind, however, when a group of grisly murders occurs in Bon Temps--and her brother is accused of the crime.

The Sookie Stackhouse series is a weird blend of paranormal romance, humor and mystery. It's written in the first person, so everything we hear is from Sookie's point of view.  Which allows quite a bit of humor and personality to come through. I love Johanna Parker's narration. She varies the voices for Sookie, Bill, Sookie's brother Jason and other secondary characters so that you can always tell who is speaking.

The book changes tone quite frequently. At times, it is a low key paranormal romance. Then it morphs into a murder mystery/thriller. Then, it shifts again, becoming a character study of the rural south. I really love the fact that this series is difficult to pin down or pigeon-hole.

The mystery wasn't all that compelling for me.  It added some suspense occasionally and gave Sookie something to do, but the reason I kept listening was mainly to learn about Sookie and the rest of the town. I found the little character sketches entertaining--especially filtered through Sookie's voice with her glimpses into their private thoughts, worries, fears, and secrets. It gives her an almost omniscient ability that expands the normally narrow limitations of first person narration.

I haven't watched True Blood (the HBO series based on the  Sookie books) so I have no idea how they compare. But I found this book entertaining enough to interest me in the rest of the series.