Review: The Dickens with Love by Josh Lanyon 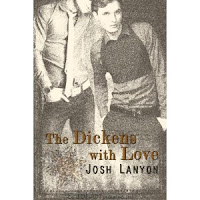 
A quirky holiday romance about Faith, Hope, and…er…glow-in-the-dark condoms!
Three years ago, a scandal cost antiquarian “book hunter” James Winter everything that mattered to him: his job, his lover and his self-respect. But now the rich and unscrupulous Mr. Stephanopoulos has a proposition. A previously unpublished Christmas book by Charles Dickens has turned up in the hands of an English chemistry professor by the name of Sedgwick Crisparkle. Mr. S. wants that book at any price, and he needs James to get it for him. There’s just one catch. James can’t tell the nutty professor who the buyer is.

Actually, two catches. The nutty Professor Crisparkle turns out to be totally gorgeous—and on the prowl. Faster than you can say, “Old Saint Nick,” James is mixing business with pleasure…and in real danger of forgetting that this is just a holiday romance.

Just as they’re well on the way to having their peppermint sticks and eating them too, Sedgwick discovers the truth. James has been a very bad boy. And any chance Santa will bring him what he wants most is disappearing quicker than the Jolly Old Elf’s sleigh.

Josh Lanyon's books never cease to surprise me with their terrific characters and complexity. But I will admit...I didn't look forward to reading this one. Because I really (and I mean really) hate Charles Dickens. Yes, I know it makes me sound like a Scrooge.

I hate his cutesy little names that are generally tied to character traits. And I think the man was too wordy. Serialized novels in the Victorian era were often wordy, and I'm no stranger to 19th century literature, but I just can't stand his style of writing. Just a personal preference, and not the fault of Mr. Lanyon.

So it was with great reluctance that I started reading The Dickens With Love. And, despite Lanyon's tongue-in-cheek use of Dickensian names as well (James Winter?), I found myself blasting through it in a single sitting. As usual for anything written by this author.

James Winter is a former antiquarian book professional who has been reduced, through a scandal involving forgeries, to working as a Barnes and Noble bookseller. His finances in ruins, he takes a job for the mysterious Mr. Stephanopoulos (despite knowing the guy's a scumbag of high order) to both make ends meet and to get a taste of the book business he adored.

I found the author's descriptions of working at BN painfully familiar. He really does know what it's like to work there over the holidays. It's excruciatingly accurate, and as a result, incredibly funny. BN booksellers often make less per hour than those flipping hamburgers at the local fast food restaurant.

The back story of a missing Dickens tale is incredibly well researched. Lanyon knows his Dickens. Much better than I do (no surprise, since I loathe the man).  It's still fun to watch poor James covet the unknown book. And to covet Professor Crisparkle. (Argh, the names!).

I read Lanyon's books for the humor and the characters. On that level, this novella succeeded. It is filled with whimsy and quirkiness. But as a romance, I didn't really buy into the relationship between Crisparkle and Winter. It seemed kind of superficial. I didn't engage emotionally as I usually do, and that was a bit of a disappointment.