There aren't many events where we can pinpoint exactly where we were when something happened. For me, there are just two. September 11th, 2001 and the explosion of the Challenger Shuttle on January 28, 1986.

I was sitting in my 3rd grade classroom watching the launch. One of our elementary school's teachers had been on the short list of teachers who were vying to  become the first teacher in space. Everyone was very excited, even if we didn't really understand the science, or danger, the astronauts faced.

And then the shuttle exploded. (Or at least, looked as though it had).

Being 3rd graders, we really didn't understand what had happened. The first clue that something was very wrong was the look of horror on our teacher's face. Right before she shut off the television.

It's easy to forget that our astronauts put their lives in very real danger in their quest for a better understanding of our world and universe. But even with the loss of another shuttle in 2003, we still tend to take launches, and space shuttle missions, for granted. 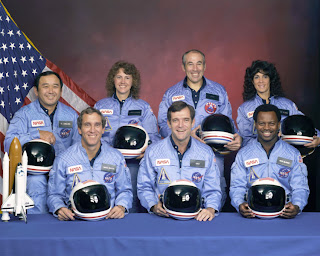 To this day, I can't watch space shuttle launches. And it boggles my mind that a whole generation has gone by. My oldest is in 2nd grade. I was in 3rd.  The shuttles are slated for retirement now, with much political wrangling over the next phase of space exploration.  I hope in the struggle to define NASA's future, we don't forget the sacrifices of the astronauts who make up the past.

For those whose memories aren't as clear as mine, NASA has compiled an information page with links and archived coverage of the disaster.
Posted by Amber at 10:59 AM