I'll start out by prefacing this with the fact that I'm not a Vegas kinda girl. It does absolutely nothing for me. So when I first heard that the convention was going to be in Vegas, I was going to skip it. I knew everyone would want to go there and that it would be crowded. I should have gone with my gut.

That's not to say that there weren't some high points, like seeing my online friends in person, but overall, this was by far the worst RT I've been to (out of the 5 total I have attended.)

There were some good panels: the ones about diversity and feminism were especially well done.
The Book Fair was well organized and the smoothest I've experienced. Check in for the convention was open early, well staffed, and easy to find. Security was present and for the most part did pay attention to who had badges and who didn't. There were several good restaurants on site that were able to handle the huge crush of people and the food was decently priced. Not great, but not as bad as other RTs.

The Bad:
The hotel sucked. The walk to the convention space was horrific. There were not enough staff at check in or at the Starbucks. There was a fridge but no microwave or coffee maker in the rooms. The smoke was a problem. And when I say a problem, I'm speaking as someone accustomed to Reno where there are older casinos and older filtration systems. The Rio's was substandard. And the bar... The bar was a huge disappointment. The highlight of every RT is hanging out in the bar with a gradually changing group of authors, readers, and bloggers, but the location of the Rio's bar in smoke central (and the laughably inadequate bar in the convention area) meant many of us missed out on that unofficial social part of RT. And, of course, there was the fact that by Saturday, our sink was backing up with water any time the toilet flushed.

There were not enough Reader or Genre panels. 3,100 people registered for RT, but there were really only 3 events for readers at any given time: which meant very long lines. I wanted to see more panels on genres or authors. I did manage to make it to a Jill Shalvis/Susan Mallery one and a paranormal panel, but there was a dearth of other options that weren't social events or games.

There were not enough books. Yes, I came home with a good 50 books or so, but many parties had no books at all, which was not the case when I began attending back in 2011. The goody room allowed you to choose 2 books from a tiny number of titles.  I didn't have to ship anything home. There was one event that was called "Shop till you drop" and let you pick ONE book. And that was after a 2 hour wait in line. They knew how many people were attending, but did not have enough books for all.

The Pop Up Signings. This is more of a personal preference, but I HATED them. Having people run down the corridor to get in line for a book just felt way too Blue Light Special to me.

I ended up giving up on many of the events and found other things to do. On Saturday, we went to Rock of Ages, which was playing in the Rio and which we thoroughly enjoyed. 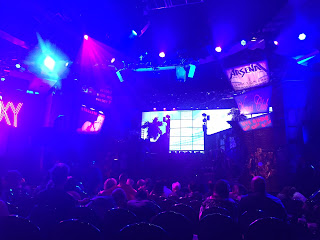 The convention also failed on all of the audio/visual needs. Only one panel had a microphone and none had projectors. Given the huge convention area, I'm sure the hotel had them, but they were nowhere to be found.

My biggest complaint remains the extra $50 I was charged to attend as a blogger. When the registration rates were first announced, I inquired as to why readers were $50 cheaper than bloggers and what we were getting for that money. I was told that we would have "exclusive" events that readers would not have access to. Those never materialized. There was one blogger event organized by Berkley. That was it. In contrast, bloggers were invited to a bookseller/librarian party in New Orleans, which is what I expected this year. I am extremely disappointed in the RT staff for not being honest about the extra charge. This is the last year I go as a blogger.