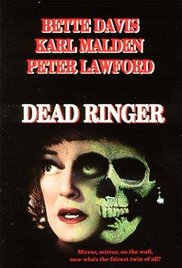 Dead Ringer is a creepy movie.
It's not the first time Bette Davis played a twin, but this performance is extra eerie. The plot is pretty straight forward: estranged twin sisters meet again at the funeral of the person who caused their estrangement: one sister's husband, whom she stole from the other.

After finding out that her sister had lied about being pregnant to steal her love away, the other sister plans an elaborate revenge: she kills her sister (faking suicide) and assumes her glamorous life.

With today's modern gore standards, this is fairly tame. It's the intimate undressing of her dead sister's body that really bothered me. She strips the stockings from her dead sister's legs, and switches clothes.

She soon finds out that pretending to be her sister is harder than it appears, and the deception begins to unravel...only to have a surprise twist at the end.

The first half of the movie is masterful...the second half isn't all that great. Still worth watching, though!
Posted by Amber at 10:09 AM