Review: Turn It Up by Inez Kelley

The Blurb:
Dr. Bastian Talbot and self-proclaimed sex goddess Charlie Pierce heat up the air waves with their flirty banter as radio hosts Dr. Hot and the Honeypot. Off the air, they’re best friends…but Bastian wants to be so much more. He wants Charlie—in bed, and forever.


Problem is, Charlie doesn’t do commitment. Sure, she’s had X-rated fantasies of Bastian, but he was always just a friend—until he impulsively proposes and unleashes the lust they’ve been denying for years. Charlie’s willing to explore where their wild chemistry leads, but she won’t marry him. And he won’t have sex with her until she accepts his proposal, despite her seductive schemes.

What are Dr. Hot and the Honeypot to do? Ask their listeners for advice on how to tame a sex kitten and turn a perfect gentleman into a shameless lover. The Race to Wed or Bed is on…who will turn up on top?


I loved this book. I really did. A steady, responsible hero with a sense of humor, a heroine not afraid to embrace her naughty side, some sexy and outrageous banter, and S'moregasms*. Can't ask for much more than that.

Before Disney princess marketing took over absolutely everything, Disney sometimes put out darker pictures. But nothing, I think, quite as dark as the Black Cauldron. Even with a Disney spin, this movie earned a PG rating from the MPAA. The first PG rating for Disney's animated division. And audiences were not quite as willing to embrace that darker vision.

Very loosely based on the Chronicles of Prydain series by Lloyd Alexander, the movie bombed at the box office. I personally think it's one of the better movies from the mid-80s that Disney put out. It's not a musical, although there are elements of music throughout. It's a little rough around the edges, but I like the dark tone of the film. The creepiness. For fans of animation, this is a must-see film.

You can see a clip on youtube here: http://youtu.be/OlT3XbfU6e8 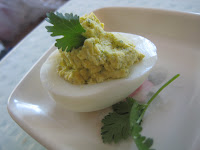 This is my husband's favorite deviled egg recipe.  The original version was from a cilantro cookbook, although we've tweaked it  a bit.

Transfer yolks to a bowl and mash with Cilantro Aioli, adding salt to taste. Using a spoon, melon baller, or pastry bag, fill egg white halves with yolk mixture. Garnish with spring of cilantro before serving.

Makes a little over 1 cup. You can mix sour cream with leftover aioli to make a terrific sauce for tacos.

Email ThisBlogThis!Share to TwitterShare to FacebookShare to Pinterest
Tags: recipe

This month's TBR Challenge theme was fairy tales. And, since I'm lazy, I went with the most recent and accessible matching title. 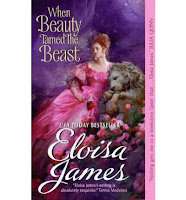 Format: mass market
Publisher: Avon
Pub Date: February 2011
Length: 372 pages
FTC: Purchased myself
Why it was in the TBR: picked it up during a Walmart excursion because I liked the cover. Yes, I am that shallow.

I used to be a rabid Eloisa James fan. Even when she was pilloried by readers and reviewers for writing wallpaper (and doing a substandard job with historical accuracy), I loved her. Especially the Essex sisters series.

But her Georgian romances left me cold and I drifted away.


When Beauty Tamed the Beast isn't set in any particular time period, but I can honestly say that the entire book felt anachronisitic.  It felt entirely too modern for me, and I'm sure much of that was the dialogue. I like witty banter as much as the next gal, but not when it's hollow. And that's what much of the dialogue felt like to me: too modern, and without any emotion whatsoever.

This is one of the few books I've read recently that redeemed itself towards the end. I had to force myself to get past the first 2/3 of the book because...I hate House, the TV series James used as a basis for her hero. I really, really hate that series. So it stands to reason I wouldn't be all that fond of the literary version, either. It wasn't until the hero and the heroine had to finally stop acting so cavalier about everything that I became involved with the story.

There's some spoilery for why the book gets more serious (which I won't go into), but I did end up liking that final third of the book and the growth of both the hero and heroine that I revised my grade upwards.

Miss Linnet Berry Thrynne is a Beauty . . . Naturally, she's betrothed to a Beast.
Piers Yelverton, Earl of Marchant, lives in a castle in Wales where, it is rumored, his bad temper flays everyone he crosses. And rumor also has it that a wound has left the earl immune to the charms of any woman. Linnet is not just any woman.
She is more than merely lovely: her wit and charm brought a prince to his knees. She estimates the earl will fall madly in love—in just two weeks.Yet Linnet has no idea of the danger posed to her own heart by a man who may never love her in return.
If she decides to be very wicked indeed . . . what price will she pay for taming his wild heart? 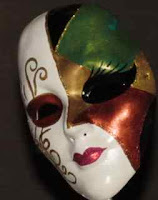 No, I'm not talking about the silly thing found in historical romances where rich people dress up and wear masks. I'm talking about when romance books masquerade as something other than romance. These are the books that non-romance readers forget to sneer about.

Catherine Coulter, Jayne Ann Krentz, Susan Elizabeth Phillips, Nora Roberts and Diana Gabaldon are a few authors I can think of whose books are often shelved outside the romance area. Sometimes in mystery or fiction. During my tenure at BN, I spent quite a lot of time of escorting a confused buyer from the romance section to the fiction section when they were searching for Jennifer Crusie books or any number of other "romances in disguise."

Anyone who has followed the blog for awhile knows that I'm not a fan of my local indie. But I did manage to find some romance there. Just not in the romance section. And invariably, it was a big name author. In my observation, big names in romance seem to more frequently warrant the general "Fiction" label from the marketing department for their books. Which in turn allows them to skirt the stigma romance continues to suffer under and sell more to a wider audience. (Women's fiction and chick lit offer great camouflage, too.)

This one surprised me by how much I liked it. It's sort of like a Rip Van Winkle werewolf story, which is unusual by itself. But it's also set in Canada, which I found a bit refreshing, too.

Dani Harper has a strong voice, something I always appreciate. There's nothing worse than picking up a book that reads just like every other book out there, but thankfully that wasn't the case here.


I've been meaning to read Cynthia Eden's books for quite some time.  Her romantic suspense books come very highly recommended, but I haven't heard much about her paranormal series. I've been on a bit of a shifter binge lately, so Never Cry Wolf fit right in.

I have no idea why, but the pack came off a bit like a biker gang. It's likely the absence of women shifters in this story, but there doesn't seem to be any community here. And that's what I like about shifter books: the way packs have both an animal hierarchy and a human support system. It felt weird not to find that here.

We went on a family drive to the Lakes Basin today. It's a gorgeous area in a neighboring county. Partly in Plumas National Forest and partly in Tahoe National Forest. 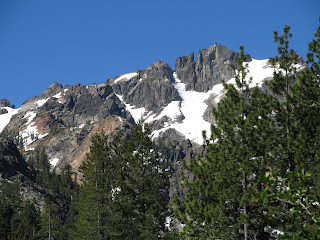 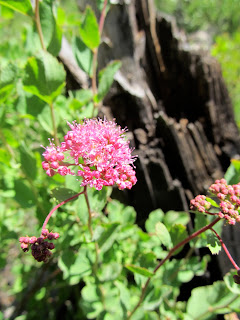 The boys love the Sand Pond area. There's a lovely interpretive trail there, but it took a beating this winter. 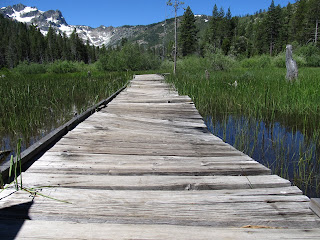 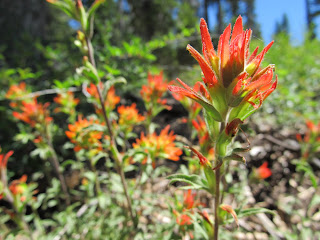 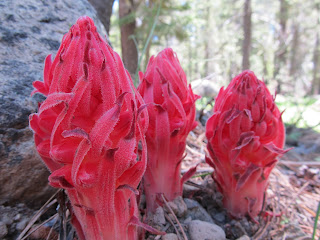 I'm not really sure what these are. They look very, um... yeah. Suggestive.

Way back in 2008, Susan Andersen was publishing a trilogy about 3 childhood friends. The first book, Cutting Loose, came out and I loved it. [Anyone looking for a rugged, hunky hero should check that book out!!] The second, Bending the Rules, came out 11 months later in summer 2009. It was ok, didn't love it like the 1st but didn't hate it either. Then I waited for the 3rd book. And waited. And waited some more. Turns out that Harlequin had up and decided to not publish the 3rd book!

Oh, I was pissed. As were the other rabid Susan Andersen fans who wanted that last story. We sent letters to her publisher. We gnashed our teeth on social networks and blogs.

Finally, HQN relented. I haven't heard exactly what had to happen behind the scenes to make this happen, but we FINALLY have the last story in the trilogy. Hot damn!!


Playing Dirty is a classic story of betrayal. Sort of a lovers to enemies to lovers story. And I'll admit, given what the hero does to the heroine, I didn't think Andersen could pull off a reconciliation that I'd believe.

Waiting on Wednesday: Wolf at the Door by MaryJanice Davidson

Waiting on Wednesday is a weekly event hosted over at Breaking the Spine. It highlights books we just can't wait to get our greedy, bibliophile hands on.

I admit, the Betsy vampire series didn't really work for me. But I've adored Davidson's other series: the werewolves, the mermaids... Her humor is so quirky.

Rachel, a werewolf/accountant, is asked to keep one eye on Vampire Queen Betsy Taylor and the other peeled for a rogue werewolf who's itching to start a war. But her attention is mostly on a sexy, mysterious stranger she wishes she could trust. 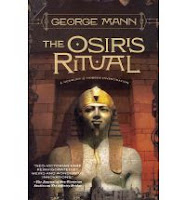 Egyptian artifacts, steampunk, and mystery together in one book? Yes, please. I was so excited to get my hands on this book. I'm an Egypt nut. And although I'm fairly new to the steampunk subgenre, it is definitely growing on me.

I was worried that I would be a little lost coming into the series in the middle, but this stands alone just fine. There are a few references to previous cases, but nothing that makes this book difficult to understand. In fact, the best parts of this book are the mystery aspects.

Email ThisBlogThis!Share to TwitterShare to FacebookShare to Pinterest
Tags: B Reviews, mystery, steampunk

Wishing everyone a safe, happy, and healthy Fourth of July! 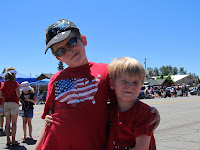 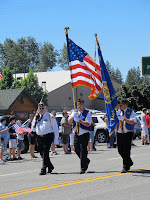 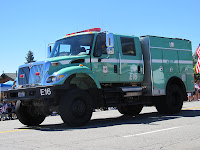 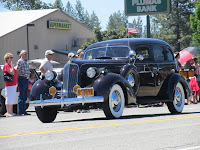 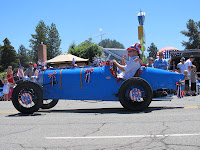 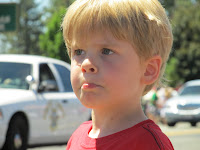 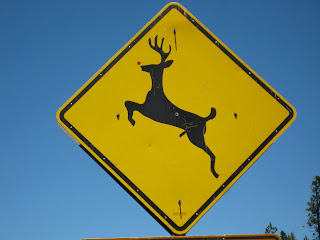 This time tomorrow, I will be sitting in a chair watching a neighboring town's 4th of July parade.

And I will be taking pictures. Like the ones I took last year. Hopefully, I won't be as unobservant. Last year, I was so entranced by the little red Rudolph nose that I completely missed the other alteration to this sign.

Yeah. Not sure how I missed the giant deer dong.

Hope everyone has a safe, happy, and fun Independence Day celebration. Me? I'm going to watch some cheesy parades and take more pictures of the "local color."

Congratulations to all of the RITA and Golden Heart Winners. Winners were announced tonight at the RWA National conference in New York City.
Posted by Amber at 5:27 PM No comments: