After trying and failing to resist an Errol Flynn 4-movie pack at Costco, I fired up the DVD player when I got home to watch The Sea Hawk. It's one of the few Errol Flynn movies I hadn't seen yet, but I wasn't surprised by how much I liked it. There's just something about Errol that makes those old movies so fun.

The special features on the disc were surprisingly informative. Normally, they skimp on those with older films or bargain packs, but not here! Apparently, they reused most of the sets (and even some of the costumes) from a Bette Davis movie called The Private Lives of Elizabeth and Essex, also starring...Errol Flynn. Even the composer was the same, but the movies ended up being nothing at all alike. Truly amazing considering how formulaic so many of those company films could be.

They just don't make movies like this anymore. The scale, the larger-than-life adventure...it's just not possible with today's inflated budgets unless you're talking about CGI. It's not rated, and there is some violence, but nothing beyond a mild PG. Very, very fun if you're in the mood for some swashbuckling, Elizabethan style!
Posted by Amber at 9:04 AM No comments:

I remember hearing about this book on several blogs early last year. Lots of good reviews, but the main reason I picked this up last April was because it featured a bull shape shifter. Which I thought was sufficiently weird and unusual.

What I did not realize (for some unknown reason, since it's pretty obvious if you glance at the blurb) was that this was a late medieval romance...a genre I'm really not that fond of. Blame it on the history classes or the medieval lit classes. Blame it on my own reading shallowness. Medieval stories just aren't my cuppa. But I read this one anyway. 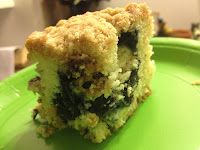 
I'm not sure why, but streusel is one of those words I can't spell without looking it up. Spell check wants to change it to strenuous, which it's really not. It's quite easy to make.

This recipe originally came from Land O Lakes and uses their brand of fat free half and half. I haven't tried it with regular half and half, but I imagine it'll probably work just fine. The cake is a little on the dry side, but if you bake it the day before and wrap it tightly, the blueberries will moisten the cake right up. Or you can just make sure to have a big glass of milk or coffee to go with its nutmeg-y goodness.

Review: Love is a Battlefield by Tamara Morgan

I have to say, Love is a Battlefield has one of the most intriguing hooks I've read in a long time: a battle of the sexes story between Highland Games athletes and a Jane Austen Reenactment Society. How could I resist?


This book is hilarious. I found myself highlighting funny lines throughout the story. Genuinely funny sections that had me snorting out loud.  But what kept this book going for me was that for all of the larger than life antics here, this is a story about two characters who are utterly believable and easy to root for.

Ok. I'm really not a Sylvester Stallone fan. Never have been. But unlike the rest of America, I liked his comedies. And I sometimes liked the movies where he got to show off his sense of humor. Demolition Man is one of those movies.

It's a sci fi action film. Most would say a mediocre one. But it has some strong sci fi commentary as well as some terrific humor. Sandra Bullock, Benjamin Bratt, and Dennis Leary are just part of the supporting cast.

The stand out scene for me is Stallone swearing at the ticket machine to get enough paper to use as toilet paper because he couldn't figure out the three sea shells. That, and the look on his face when Bullock's character explains about a constitutional amendment allowing Arnold Schwarzenegger to become President of the United States.

Some Political Ranting Ahead... 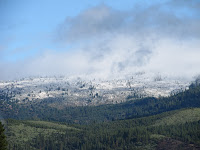 No, not the GOP vs. Democratic Party kind of political ranting. Not even the Susan G. Komen vs Planned Parenthood debacle. This is about a local issue. It's about schools. Rural schools in particular.

You see, here in the mountains we've had a bit of a decline in school populations. Some have left the area. Some have moved to the private, Christian school. And some are in the charter school. The local district has half of the population they did back in 1995. Half.

And the same number of schools.

Ordinarily, that would make sense, right? Why have schools open if you don't have the students to fill them?

Here's the problem: these are RURAL schools. We're not talking about areas where the next elementary school is a few blocks down the road. We're talking about, in some of the worst case scenarios, busing kids on curvy mountain roads during the winter for 45 miles one-way.

In the winter, with chained buses, that equals a 1.5 hr bus ride each way at the minimum.

We're also talking about pushing school capacities over their maximum to squeeze two schools into one--to save on the utility and janitorial bills.

What this means is that class sizes are going to go up dramatically. It's possible that we will no longer have room for our school library. Never mind that we've had bare-bones staffing for that library. There may not be  a physical place for it because it is needed for classroom use.

It costs a lot more per student in rural areas than it does for urban areas, just in overhead. Partly due to transportation costs, but mostly because we need more schools than other areas due to the geography of where we live. This added expense used to be supported through the sale of timber on USFS land. Changes in federal law resulted in the Secure Rural Schools Act. Essentially, a plan to exchange the idea of cutting down trees equaling money for schools to a plan that reimburses counties for the lost property taxes due to high percentages of federally owned land.

That bill was not reauthorized and this year is the last year for any additional money from the feds.
Given the financial reality in California, this has resulted in a huge hit for schools everywhere, but especially in the rural areas of Northern California.

The situation is grim here in the West. I know education is suffering everywhere, but in this county, we'll have several vacant schools to serve as visual reminders of where our priorities as a country seem to be.

When I was younger, The Black Hole scared me. A lot. After watching it as an adult, I think the reason is the super creepy music. It's pretty freaky.  I hadn't seen Psycho yet, so it wasn't the fault Anthony Perkins.

The Black Hole has one of the most boring opening sequences ever. Minute after minute of nothing but space images followed by several minutes of opening credits with primitive computer graphics.  Then we get lots of radio chatter. It isn't until 5 minutes in that we see our first actor on screen. With a really cheesy robot.

But I have to say, once the movie gets going, it is either action-packed or full fledged creepy. Mostly creepy. Even though it came out two years *after* the first Star Wars film, the effects are often not up to snuff. There's some that work fine, others that are as bad as anything done in the 1950s.

As sanitized as Disney is these days, it's hard to imagine they used to put out movies with a bit of an edge. This is one of them. There is peril! And the occasional bad word!