Review: The Painted Queen by Elizabeth Peters and Joan Hess

I started reading the Amelia Peabody series in college. There is just something about them that is so compelling. The series runs from the late 19th century through World War I and ends with the discovery of King Tut's tomb. This series is my comfort read series. The first is a solid Novel with Romantic Elements book.  Back in 2013, I even led a read along on Twitter, but stopped midway following the death of Elizabeth Peters that year.

When Peters passed away, it was well known that she was working on a new manuscript, although her fans were never quite sure how far she had progressed on it. I assumed we'd never see that book, but I was happy to hear that her estate was working to get it finished and into the world.

If you have not read the series, this is absolutely NOT the book to start with. Although each story is a standalone mystery, this series was NEVER about the mysteries. Those have always been secondary to the relationships, and there are multiple arcs that should be read in order. If you're just starting the series there are two ways to read it: as it was published or chronological. After Peters finished the Tomb of the Golden Bird, she went back and started publishing "in between" books that covered archaeological seasons she had skipped. The Painted Queen is one of those "in between" books, taking place between Falcon at the Portal and He Shall Thunder in the Sky.

Review: Hate to Want You by Alisha Rai

Ok, it wasn't that long ago that I had a post up about wanting less sexual content in romance.  That I had become a sex scene skimmer, because there's way too much *boring* sex in romance these days. So much so that the plot gets lost. Of course, I maintained that there were a few exceptions to that rule, and Alisha Rai's books have always been that for me.

Hate to Want You is Rai's first Avon book, though, so I wasn't sure exactly what to expect. Well...the sexual content isn't light. If you thought her signing with Avon meant less sex, dispense with that notion right now. The good news is that, like the other Rai books I've read, the sex scenes move the plot forward. There is absolutely NO Tab A into Slot B laziness in her writing.

At first, this book is solely about sex. Our hero and heroine meet once a year for no-strings-attached sex, despite a huge, ongoing family feud that broke them up as teens. When Livvy shows up in town, Nicholas decides that their once a year arrangement just isn't enough. It's through their sexual relationship, already well established, that their love rekindles. So few authors can make me buy into that anymore, but this book did it well.

There's also plenty of plot outside the bedroom, as a good ole family feud is brewing about a grocery store dynasty. You get lots of side drama from both families. Lots of emotion. There's a lingering sweetness here, too, as this is a second chance at love story.

I'm always terrified when Avon buys someone who has a strong voice I love, but this book was fabulous. It's definitely a keeper, and I'm looking forward to the next in the series.

One night. No one will know.
That was the deal. Every year, Livvy Kane and Nicholas Chandler would share one perfect night of illicit pleasure. The forbidden hours let them forget the tragedy that haunted their pasts—and the last names that made them enemies.
Until the night she didn’t show up.
Now Nicholas has an empire to run. He doesn’t have time for distractions and Livvy’s sudden reappearance in town is a major distraction. She’s the one woman he shouldn’t want . . . so why can’t he forget how right she feels in his bed?
Livvy didn’t come home for Nicholas, but fate seems determined to remind her of his presence—and their past. Although the passion between them might have once run hot and deep, not even love can overcome the scandal that divided their families.
Being together might be against all the rules . . . but being apart is impossible.

Not only am I a day late with my TBR review, I'm stretching the theme just a bit. This month's theme is "a series you're behind in." Well...this is book 1, and I haven't read any of the others...So I'm claiming it qualifies as a series I am (way, way) behind in.

I found this book in a sad, neglected box in the depths of the garage a few weeks ago. A box that has sat, unpacked, since our move in 2004. I used to read quite a bit more mystery back in those days, and I'm quite sure I picked this one up from a library used book sale somewhere. It's...weathered. 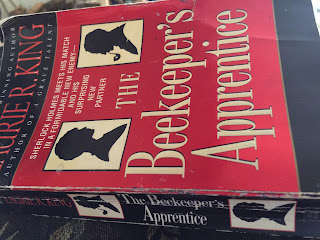 It is also, in case the pipe on this weird cover doesn't give it away, a Sherlock Holmes book.