Goodreads Steps in It

Much of the drama of the last year between authors and reviewers has centered around the Goodreads site. It has been likened to the Wild West or a walk through the bad part of town. There are rules, of a sort, but they are rarely enforced. To date, Goodreads has taken a hands-off approach to both authors commenting, harassing or spamming readers and to reviewers writing snarky reviews, putting misbehaving authors on do-not-buy shelves or otherwise not being nice.

That hands-off approach ended today when Goodreads admitted to hiding reviews and announced "new guidelines" for why they would be hidden.

In the thread started by Ridley titled, Why Has My Review Been Hidden, Community Manager Patrick explains in detail about new changes to a (supposedly) existing policy.

"Our philosophy is that your review is yours to write as you see fit and we're happy to have you express whatever opinions you like in those reviews. They'll always be shown on your profile and be on your shelves, but the book page is ours to curate, and that's something we've been doing since the start of Goodreads. We want to make sure that we're showing the most relevant and most useful reviews on that page. "


I don't know of other reviews being hidden before. It's possible. But call me skeptical given Goodreads' previous hands-off approach.


"We'll be posting our review guidelines, which clearly spell out what is likely to get a review hidden, in a couple of days."


Nice that they've been working on these guidelines but are enforcing them before making them public.

My favorite one is perhaps this one:

'One of the points in our guidelines will be "review the book and not the author."'


This one gets my goat probably more than anything else in his response. And the reason is because this is the "be professional" mantra of the poor authors complaining about bad reviews. It's straight out of their playbook and gives me a clear indication of where these new rules are headed. And it's not in the direction of open, sincere communication among readers.

If Goodreads wants to sanitize their book pages in order to monetize them, that's their business, obviously. But it seriously undermines my trust in the site. I want to see ALL of the comments about a book on the book page. Not those that Goodreads deems "relevant and useful." Without that openness, the site loses much of its value for me.

I admit to being disappointed. Goodreads has started a practice that will only grow more cumbersome, more fraught with drama, more irritating as time goes on.
Posted by Amber at 8:21 PM 22 comments:

Since I tend to know where or how I acquired my print books, I retreated to my digital TBR for help with his month's theme, "How did this get here?"  I'm pretty sure I picked this one up around DABWAHA time, but I honestly can't remember. Close enough!

Anthologies are a fun way to try new authors or to read shorter works by a favorite one. I'm always curious to see how well short stories and novellas fit together both with the theme and with the other authors included. In Wild & Steamy, I have to say not so well. Each author's story was well crafted, but as a whole, it just didn't fit together.

I've only read one previous Granite Lake Wolves story by Vivian Arend, but I liked it. And she's a hoot to talk to in person (which I was lucky enough to do at this year's RT convention.)  But this book just didn't click with me.


Jared is running away from a nasty confrontation with the family of an ex-lover. He hitches a ride on a cruise ship, masquerading as a member of the crew. Keri has promised her best friend that she'll help keep this shifter-only cruise running smoothly, but her insane attraction to Jared is just the beginning of problems that crop up. The biggest? There's a thief on board, and evidence seems to point to Jared being the one responsible.

Coming in mid-series is always a problem in the paranormal romance genre, but this one seemed particularly troublesome. I felt like I should already know Jared based on other books, because his character was so thinly drawn in this one. His "disability" was somewhat awkwardly explained, and left me as confused as Keri was. There was humor, but it seemed buried under that 'insta-mate' compulsion that just overwhelmed the rest of the story.

Wolf Line was a steamy, short read, but I never really ended up invested in the characters or their romance. Maybe it's the novella length, maybe it's the lack of tension, but I found the book fun but forgettable. Fans of the series will like it anyway.


Into the best-laid plans a little chaos must fall.


Jared’s not sure how his quiet morning coffee near the harbour ended with him on a cruise ship impersonating one of his pack mates. Well, it might have something to do with a woman, but who can blame him? The female of the species was made to love, and he’s more than willing to share his considerable skills in that area. Especially since he figures the chances of meeting his own one-and-only are slim.

Keri Smith is positive the last-minute recruit sneaking aboard the Arctic Wolf Cruise Lines tour is her mate. Ix-nay on confirming that, though, at least for the next ten days. She’s promised her best friend to be overall troubleshooter for the shifter-only cruise. Getting tangled up in mating lust would reduce her skills to nil. Avoidance of the sexy wolf for the duration of the cruise, followed by jumping his bones, seems the logical solution.

But when libidos are on the line, “logic” and “wolves” don’t go together. Throw in suspicions of wrongdoing, and these two virtual strangers will need a lot more than luck to find their way through to forever.

While I normally love happy movies, I occasionally like revisiting movies that MOVED me. A movie that stuck with me, even if only parts, will sometimes demand a rewatching. Stand by Me is one of those films.

I never understood quite why this film bothered me until I found out it was based on a Stephen King story. Stephen King freaks me the hell out. Even his works that aren't supposed to. He makes me squirm in an uncomfortable way with his ability to delve deep into human behavior. *creepy*

On the film history angle, the sheer number of future stars contained in this film is astounding. And not just "stars" but TALENTS. Wil Wheaton, River Phoenix, Corey Feldman, Jerry O'Connell. I dare you to watch this film and not have some kind of visceral reaction to it. Good or bad.

This is the movie that makes the Six Degrees of Kevin Bacon so easy. Not only does it have Bacon, it has Julia Roberts, Kiefer Sutherland, William Baldwin AND Oliver Platt.

This is a relatively tame horror movie despite its R rating, but the sheer number of BIG NAMES in it made it a must-see for me when I was in high school. I think I've seen it maybe once since then. Luckily for us all, it's free to stream for Prime members on Amazon. Woohoo! And it's fairly cheap to purchase, too.

Are you afraid to die? Kiefer Sutherland isn't. He's an ambitious, charismatic medical student who persuades classmates Julia Roberts and Kevin Bacon to take part in a reckless experiment. To see if there is life after death, they will kill themselves: temporarily shut down ("flatline") their heart and brain functions to briefly experience clinical death. After Sutherland survives the first experiment, the others flatline for increasingly longer intervals. But their horror begins when they realize that although they've come back alive... they haven't come back alone. Flatliners is a chilling suspense thriller of obsession, fear and redemption that will take you across the line to a place where terror lives forever.

Oh, and while researching the whole Six Degrees thing I found this little gem on Wikipedia:

Summer if finally here, and the boys are out of school. Surprisingly, this means I might actually get some reading done in between the road trips and plane trips, and jaunts down to the local pool. 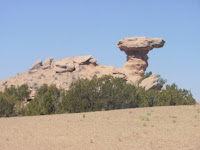 Sadly, no time for baking, but I do plan on trying a few recipes before our fair in August.

What is everyone else doing this summer?