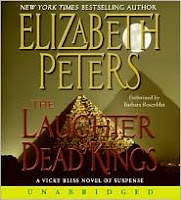 It's been well over a decade since we were last treated to a new Vicky Bliss novel. Ms. Peters (aka Barbara Michaels aka Barbara Mertz) has obviously been focused on completing her Amelia Peabody series which wrapped up with the Tomb of the Golden Bird. And, unfortunately, the lapse between novels is what causes a huge continuity problem--a fact that Ms. Peters addresses in a forward.

Although this is far from the best Vicky story, it's well worth reading anyhow. The characters have always been the main appeal to the series, and reading this installment is like visiting with an old friend you haven't seen for years. Familiar, but also new.

I listened to this one on audio--tempted because the narrator was Elizabeth Peters's "official" narrator: Ms. Barbara Rosenblat. Rosenblat is one of the absolute BEST narrators of audiobooks. Only Jim Dale, of Harry Potter fame, comes close. Her skill with dialects and accents is so amazing to me. I have listened to other versions of Vicky Bliss, notably one voiced by actress Kathleen Turner, but only Rosenblat does Schmidt convincingly.

I won't spoil the ending, but I do want to say that Ms. Peters manages to tie this series to her other one and even makes an appearance as herself in the narrative of the story. Quite funny for fans of her other series.

If you haven't read a Vicky Bliss mystery, please do not start with this one. There is a chronology of sorts--although the changes in culture and technology may make it more confusing than it really is--and reading them out of order would diminish the impact. Technically a stand alone story, it is a novel that is so much richer if you've followed the characters throughout their previous escapades.

For those wanting to go back to the beginning, here is the order:

I enjoyed revisiting these wonderful characters. For fans of the series, this has been a long time in coming.
Posted by Amber at 7:23 PM No comments:

Book #2 in the new trilogy by Linda Lael Miller was a pleasant surprise! It was far better than the first installment (which was by no means bad). The characters were terrific, the story believable, and the romance incredibly sweet.

My only real complaint is that Ms. Miller's clear fondness for animal welfare becomes a bit too preachy and obvious at times. We KNOW how she feels about animals--we don't need to be constantly hit over the head with it.

I blasted through it in one day and am now stuck waiting impatiently for the finale.
Posted by Amber at 9:07 PM No comments:

First of all, kudos to Ms. Ross for having an amputee as her main character. Many authors tend to shy away from disabilities because they view them as 'downers.' And, in general, romance novels are an elite form of escapism where the point is a pick-me-up.

Ms. Ross handles the issue with an optimism that is refreshing, but also takes an easy out in the plot and logistics department by giving Shane, the main character, a super-advanced prosthetic.

Kudos to Ms. Ross as well for acknowledging the often overlooked costs of war--not just the number of the fallen, but those who come back damaged both in body and in spirit.

As for the story itself, I'd have to say that it isn't quite as good as the previous two installments in the series. My biggest grief is the constant time shifting in the narrative. One minute we're in the past, the next in the present, back to the past...it gets confusing and makes the story seem choppy.

I'm also REALLY irritated that Mike Gannon's story gets buried in the background of this one.

Overall, though, it is a compelling story about two people who get a second chance at love. And it has some pretty dramatic scenes towards the end packed full of action.
Posted by Amber at 10:12 AM No comments:

Of all of the social networking sites out there, I think Shelfari is the most unique. It's for book lovers, owned by Amazon, and it quite frankly a whole lot of fun!

If you haven't stopped by to create a profile yet, you absolutely should.

http://www.shelfari.com
Posted by Amber at 9:53 AM No comments:

It's about time I started my own blog filled with my reviews for Romance and Mysteries.

With money being tight these days, we're all being more selective about which books we buy and which we borrow. I hope these reviews help make the decision a little easier!
Posted by Amber at 8:17 AM No comments: