Review: Halfway to the Grave (audio) by Jeaniene Frost 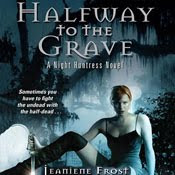 Because I started with the second book in this series, this book was more like a prequel to me than the first book in a series. And since Blackstone Audio just released this first book in audio format, I decided to see how well the series translated to that format. The answer is: perfectly.

The narrator, Tavia Gilbert, brings to life Bones's accent and attitude. Cat is a bit more subdued than she was in the later books, but I think part of that comes from the relative immaturity she has in this book.

For those unfamiliar with the series, here's the "blurb."


Half-vampire Catherine Crawfield is going after the undead with a vengeance, hoping that one of these deadbeats is her father - the one responsible for ruining her mother's life. Then she's captured by Bones, a vampire bounty hunter, and is forced into an unlikely partnership.

In exchange for help finding her father, Cat agrees to train with the sexy night stalker until her battle reflexes are as sharp as his fangs. She's amazed she doesn't end up as his dinner...are there actually good vampires? Pretty soon, Bones will have her convinced that being half-dead doesn't have to be all bad. But before she can enjoy her status as kick-ass demon hunter, Cat and Bones are pursued by a group of killers. Now Cat will have to choose a side...and Bones is turning out to be as tempting as any man with a heartbeat.


The only bummer is that the rest of the series will not be available for download or on CD until NOVEMBER.

I didn't love this book as much as book #2 in the series, but that could just because I read them out of order. I like Cat much better in later books--after she grows up just a little. She feels just a little too young for me here. But this is a fun book, nonetheless.

You can find the download version on audible or buy directly through Blackstone Audio on MP3CD.
Posted by Amber at 8:34 AM