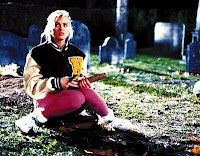 Yeah, I know everyone just loved the TV series, Buffy. But me? I never really got into it. Not really sure why. And I think the movie that spawned the series has been seriously underrated for a long, long time.

Buffy the Vampire Slayer, released in 1992, starred Kristy Swanson alongside some serious cinematic icons: Rutger Hauer and Donald Sutherland. It also starred Luke Perry and David Arquette. But what makes this film a summer movie pick for me is what I consider the best death scene ever. I mean ever. Paul Reubens (of PeeWee Herman fame) has the most hilarious role in this movie.