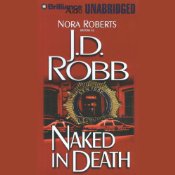 Eve Dallas is a New York police lieutenant hunting for a ruthless killer. In over 10 years on the force, she's seen it all - and knows that her survival depends on her instincts. And she's going against every warning telling her not to get involved with Roarke, an Irish billionaire - and suspect in Eve's murder investigation. But passion and seduction have rules of their own, and it's up to Eve to take a chance in the arms of a man she knows nothing about - except the addictive hunger of needing his touch.

At the urging of my husband, who listens to far more audiobooks than I ever could thanks to his job, I decided to give Naked in Death a try. I knew of the series, of course. JD Robb is the not-at-all secret identity of Nora Roberts. And I have more than just a smidge of Nora fatigue. So, to say I was a little cautious is an understatement.

But I have to give her credit: if I didn't know La Nora had written this, I would not have guessed it. It is completely different from any of her romances. (And I've read the majority of them). The futuristic setting is far grittier than anything I can remember her writing. And while there is a romantic element, the majority of the story focuses on Detective Eve Dallas and her quest to track a serial murderer.

The narrator does an excellent job of using different voices for each character. And the male voices don't sound forced as is the case for some women narrators.She does a solid job and enhances the story.

The story itself is technically a mystery, but I had no difficulty guessing whodunnit. I think the characters, and Eve's inner struggle with her burgeoning relationship with Roarke, are what make this book compelling. All of the characters are well done. Even the secondary ones. And Roarke is just plain awesome.

I think this skirts the line between mystery and romantic suspense. And I think the futuristic setting makes this just different enough to be unique without annoying those who don't like even a whiff of paranormal or fantasy in their books.