TBR Challenge Review: What the Librarian Did by Karina Bliss 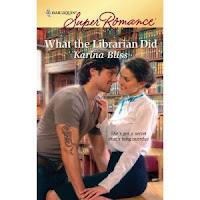 I've had this in my TBR for a while now (having heard good things about this author), but had completely forgotten about it. It's not *that* old of a book, but since it's now a finalist in the DABWAHA book tourney, I figured now was a good time to dig it out of the digital book pile.


Is Rachel Robinson the only one on campus who doesn't know who Devin Freedman is? No big deal except that the bad-boy rock star gets a kick out of Rachel's refusal to worship at his feet. And that seems to have provoked his undivided attention. Devin, the guy who gave new meaning to the phrase "sex, drugs and rock 'n' roll." Devin, the guy who somehow becomes wedged between her and the past she's kept hidden for years.

It's up to this librarian to find out firsthand just how "bad" he really is. Because her secret--and her growing feelings for a man who claims he's bent on redemption--depend on his turning out to be as good as he seems. Which is really, really good.


I've never read Karina Bliss before. She's definitely a new-to-me author. But after only reading a few pages, I could tell she had a distinctive voice (rare, in my experience, for series authors). And after a chapter or two, her characters had already been fully developed. Yea!

Rachel's "Big Secret" seemed kind of overblown. And her reactions to it seemed even more so. I could understand having issues from your past mess with your contentment in the present, but this seemed a bit exaggerated.

I liked the mixture of American and New Zealand sensibilities. My knowledge of New Zealand could fit on the head of a pin. (And it's still 99.9% Lord of the Rings film locations). But the inclusion of New Zealand as a setting for a series romance didn't seem odd at all after the first few pages.

Overall, I enjoyed the story, but it felt like Bliss had put a little too much conflict in this one. Too many subplots squished into a story that should have had a narrower focus. It's a common problem for series romance, and one I think authors overcome with time. If I'm in the mood for another series romance, though, I'll be sure to look for a Karina Bliss title.

unrelated note: I had a wonderful, nostalgic flashback to my college days with this book. When my best friend, a physics student, had her books knocked from her hands (accidentally of course) by Mark McGrath of Sugar Ray fame. MTV Campus Invasion was at UNR that year. And my friend had NO IDEA who he was. Just said "thanks" when he picked up her books and apologized, then went right on going to her next class. No real life "meet cute" but funny just the same.
Posted by Amber at 10:13 AM