Long Weekend In the Redwoods

Hard to believe, but our idea of taking a vacation from the woods was...to travel to a different kind of woods. We traveled across California to the Redwoods. They are spectacular, and the boys had never seen them. Nothing deflates your ego like the majesty of nature at its most gigantic.  When people unfamiliar with the diversity of California think of Cali, they think of So Cal beaches or the high desert riddled with joshua trees. But California, especially Northern California, is so much more. 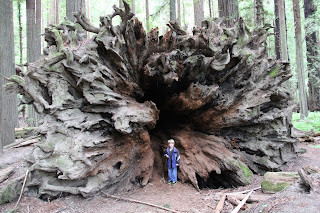 This is my youngest posing by the root cluster of a downed redwood on the Avenue of the Giants.  They truly are enormous, with most tall AND  wide. 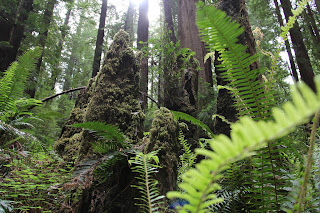 The light is very eery in the redwood forests. It has that damp, ancient quality that calls to mind Bigfoot or dinosaurs. You can find both here, as towns celebrating the Bigfoot legend proliferate and one of the Jurassic Park movies was partially filmed in Fern Canyon. 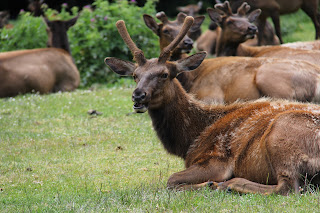 I wish I had taken a picture of the road condition sign we passed, because it was hysterical. In the Sierras, we have a short range broadcast on 1610 am for snow closures. In Humboldt county, they tune to the same station for elk reports. These stately, and LARGE, creatures know they're protected here. They dallied in the roadway for several minutes before ambling over to their rest area. 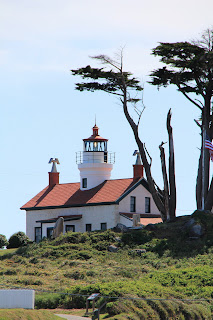 This is Battery Point Lighthouse in Crescent City, CA. I was surprised by the size of Crescent City, because I'd always heard it was "quaint." It's significantly bigger than our town, though, and smack in the damage zone for tsunamis, having been hit twice before.

The boys were great. No one got carsick, although my youngest did complain that he had a case of terminal travel butt. California is a big, big state, but I'm glad we were able to make the trek to the ocean. Camping, alas, holds no appeal when we live in the woods.

Did you go anywhere on over Memorial Day?
Posted by Amber at 3:58 PM