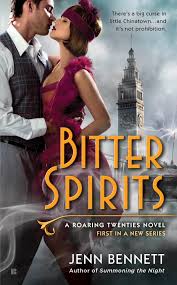 After last month's outlandishly early scheduling of my TBR Challenge post, I should have known I would fail at being punctual this month. This time, it was me going on vacation and forgetting the darn book at home. Oh well. The theme for the challenge was Lovely RITA, and I was so happy to find one right at the top of the TBR pile from RT back in May.  Bitter Spirits is up for a RITA this month at the RWA conference.

Although this is a paranormal historical romance, I think the "woo woo" stuff would get a pass from some with paranormal fatigue. There are no werewolves or vampires here. There are, as the name hints, some ghosts and spirits. There is also some Chinese mysticism, some seance-y stuff, and other more common paranormal elements. But it is shapeshifter and vamp free.

I've been pretty excited to try this series because it is something fairly outside of the norm in terms of historical romance. It's set in San Francisco which is so very rare. If you can find a US set historical, they're usually New York or Texas. It takes place during Prohibition (yay!) and has all of that jazz age cool going for it. The hero, a bootlegger,  is first generation American from a Swedish family and the heroine is an independent woman making a living as a stage medium. Everything about this book is fresh and appealed to me.


Part of the challenge, I'm sure, with writing about an uncommon time and setting is that you have to fill in more details that we tend to take for granted in other eras. Things like costume, transportation, social mores all have to be put on the page somehow for readers because there isn't a giant pile of Romancelandia knowledge (not necessarily historically accurate, either) to pull from. The biggest challenge is balancing the information with the plot, and I felt like Bennett struggled with that a bit in the beginning. There is a crap ton of details about clothes and setting. It weighed the story down for me in quite a few places. I don't think I really need to know that her bracelet is Bakelite. It's period-appropriate, but is it necessary? Not for me. I'm really impossible to please with this. Too little detail and it's wallpaper. Too much and it drags.


Fortunately, the characters and plot eventually wrestled my eyeballs away from the minutiae. Aida Palmer is a strong woman who makes her own way in the world. She uses her abilities to channel spirits in a stage act at a club, and is 100% legit. She can connect with ghosts, and it's that ability that brings her into Winter Magnusson's world. Her boss asks her to meet with Winter who, it turns out, has been cursed and is being haunted by ghosts. Aida can get rid of them. The attraction between the two is immediate, and it's fun to watch their relationship build.

Much of the book is spent figuring out just who has cursed Winter and why. Aida, first as his ghost consultant and later as his lover, tags along as they try to hunt down the parties responsible. There's quite a bit of action that takes place in Chinatown, and Bennett spends a great deal of time fleshing out the different San Francisco neighborhoods as the duo explores the city in search of answers.  There are some terrific supporting characters who help give the book depth, which is great considering this is the first in a series.

I enjoyed the romance quite a lot, but I really enjoyed the atmosphere of the book as a whole. It's spooky, cool, and refreshingly unique. I'm looking forward to reading more books in the series.

It’s the roaring twenties, and San Francisco is a hotbed of illegal boozing, raw lust, and black magic. The fog-covered Bay Area can be an intoxicating scene, particularly when you specialize in spirits…

Aida Palmer performs a spirit medium show onstage at Chinatown’s illustrious Gris-Gris speakeasy. However, her ability to summon (and expel) the dead is more than just an act.

Winter Magnusson is a notorious bootlegger who’s more comfortable with guns than ghosts—unfortunately for him, he’s the recent target of a malevolent hex that renders him a magnet for hauntings. After Aida’s supernatural assistance is enlisted to banish the ghosts, her spirit-chilled aura heats up as the charming bootlegger casts a different sort of spell on her...

On the hunt for the curseworker responsible for the hex, Aida and Winter become drunk on passion. And the closer they become, the more they realize they have ghosts of their own to exorcise…