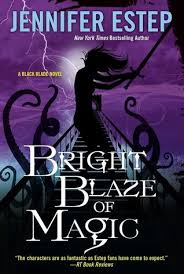 As the conclusion of the Black Blade trilogy, this book did its job, wrapping up various threads in a neat and tidy way. For me, it was almost TOO tidy.  Warning: there be (minor) spoilers ahead.

Overall, I think the first person, past POV works to the series' advantage, but in this book? I think it really hurt being able to connect deeply with the action. Lila is pretty inured to violence and death, but there's A LOT of death in this book. A lot of gruesome stuff. And she just doesn't spend a lot of time or emotion on it. It might be consistent with her character, but I think it hurts the overall impact of the story to have her not really be affected by some of the things that happen, and because we experience the story through her, we don't really get a lot of time with the other characters' reactions, either.


I really enjoyed the monsters in this book...probably more than in the other books. They had a more central role, and made it feel much more like an Urban Fantasy novel this time around. There's plenty of action and drama to make up for the lack of romance, though, and this is probably the most action-packed of the three books.

My only disappointments were that this does not stand alone (at all!) and that it skirts any really deep emotion. I wanted a bit more angst, which this book just didn't deliver.

As a thief, I’m good at three things: hiding in the shadows, getting in and out unseen, and uncovering secrets. I put these skills to work for the Sinclair Family, one of the magical mobs that run the tourist town of Cloudburst Falls.

Everyone knows Victor Draconi wants to take over all the other Families—and kill every last Sinclair. What they don’t know is that I’m on to him, and no way will I let the man who murdered my mom get away with hurting all the other people I care about. Especially when I’ve got places to break into, stuff to steal, and Devon Sinclair fighting right by my side…

Email ThisBlogThis!Share to TwitterShare to FacebookShare to Pinterest
Tags: Jennifer Estep, YA