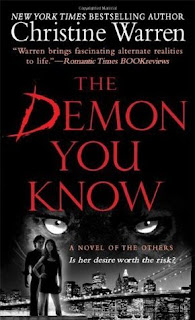 Rule is just as annoying and flat. Cardboard characterization. He's a single minded stick-in-the-mud who doesn't like to explain himself. *Yawn* There is zero romantic tension, just an insta-lust that is thoroughly unbelievable and uninteresting. The ONLY character besides Lou who is somewhat fleshed out is Abby's brother, who I'm assuming gets his own book later in the series.

This is a completely forgettable paranormal romance with no memorable characters or plot, no tension, and no emotion. I know Warren has written better books. Definitely skip this one.

A SILENT BEAUTYAs a research grunt at a local television station, Abby Baker tends to blend into the background, which is where she's most comfortable. But when she ends up being the last resort to cover a hot story, Abby discovers a whole new side to her personality when she is possessed by a fiend―a type of rogue demon. Suddenly everyone wants a piece of her. And now the demon Rule―also a hunter of his own kind who have gone astray―is Abby's only hope…A SUDDEN PASSIONMeanwhile, the Others―vampires, werewolves, and witches, oh my!―have come out of the supernatural closet and the rest of the humans are all aflutter. Mischief is afoot in the demon realm, and Rule knows that Abby is key to figuring it all out before the fiends tip the fragile balance between the newly-discovered Others and the humans over into an epic battle. Now it's up to two lost souls to make love, not war…..